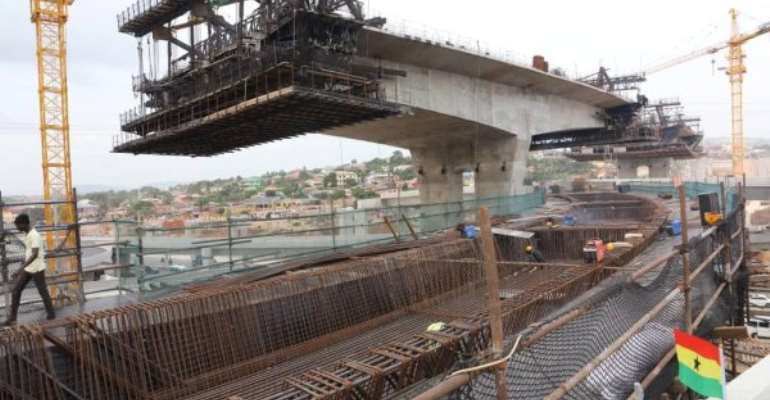 President Akufo-Addo Wednesday commissioned the first phase of work on the four-tier Pokuase interchange on the Accra-Nsawam road.

The President, who is on a two-day campaign tour of the Greater Accra region drove through the Interchange to partially open sections of the 84 million dollar project to traffic.

The Pokuase Interchange, which connects the Nsawam Road to the George Walker Bush Highway is being jointly funded by the African Development Bank and the Government of Ghana.

Originally scheduled to be completed October this year, the project is expected to be finished in March 2021. Work on the Interchange started in 2018.

When completed, the infrastructure, the largest in West Africa, is expected to improved mobility on the Accra-Nsawam section of the Accra-Kumasi Highway, reduce the incidence of road crashes at ACP Junction, and enhance sustainable economic growth for the people in the area, as well as facilitate traffic between the Tema-Ouagadougou-Bamako corridor.

President Akufo-Addo had earlier unveiled a statue of the late Theresa Ameley Tagoe, a former minister of state, member of Parliament and first National Women's Orgainser of the NPP at the Dansoman Roundabout in the Ablekuma West Constituency.

He described Madam Tagoe, who died ten years ago, as "a valiant member of our struggle for freedom and democracy in Ghana. "

"She was one who was determined to break through the ceiling and the glass barrier and make it clear that women have a strong contribution to make in the public life of our country as any man.

" She's a politician of the first night, she founded the women's wing of the NPP, she was a vibrant member of the NPP until her untimely death...she served in President Kufuor's administration with zeal and enthusiasm.

" Today's ceremony remembers her life of contribution, the life of participation, a life of assistance to your community...your community will not forget you.

"I am happy to have lived to see this monument to her memory, her sacrifice and her to work. She is a shining example of what is possible for each and everyone of us if we stay true to our beliefs," he said.

The President also made stops at the Mallam Market and the Odorkor Lorry Station, all in the Ablekuma North Constituency and the Agbogbloshie market area, where he interacted and sold the message of continuity to traders, commercial drivers, residents, community leaders and identifiable groups.

He told them that the success of the policies and programmes of his government since assuming power in 2017 was a call to Ghanaians to renew the mandate of the New Patriotic Party to build on the foundation that it had laid for the transformation and prosperity of the country.

The President was accompanied by the Minister of Trade and Industry, Mr Alan Kyeremateng, the Minister of Roads and Highways, Mr Kwasi Amoako Atta, Minister of Foreign Affairs and Regional Integration, Madam Shirley Ayorkor Botchway, and other government delegations and executives of the New Patriotic Party.