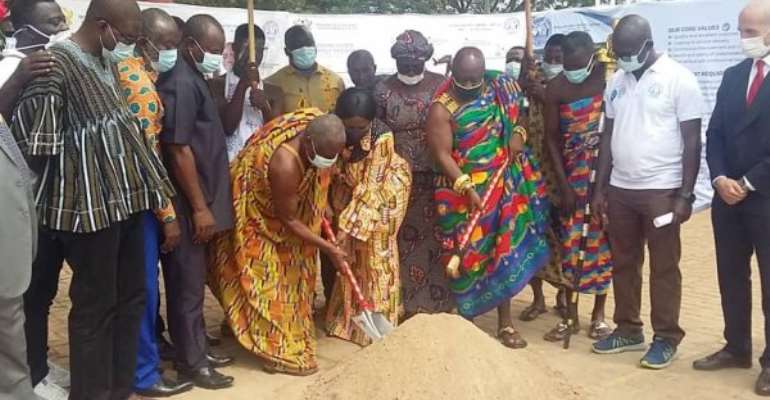 Madam Cecilia Abena Dappaah, Minister for Sanitation and Water Resources on Tuesday said government was committed in providing portable water for the people in Sunyani and the nation in general.

She observed that resorting to several sources of water poses danger to the health of the people since water was a necessity in the sustaining life.

The Minister was speaking at a sod cutting ceremony for the commencement of the phase one water supply project for the people of Sunyani East, West and it surrounding communities in Sunyani.

The water project under the construction of the LR group of Israel at a total cost of Euro 133,332,500 was being funded between the Government of Ghana, the Swedish Export credit Agency (EKN) and the Standard Chartered Bank of the United Kingdom.

She said about 405,093 population in the Sunyani township would benefit from the project when completed the supply would be increase to a daily production capacity of 55,000 meter cube of water to meet the demands of water up to the year 2040.

Madam Dapaah said the Abesim water plant built in 1962 with a capacity of 800 meter cube of water per day was rehabilitated in 1999 with minimal expansion to 8,160 meter cube daily, but has not seen any major renovation since.

She said due to the effect of aging and reduction in efficiency of the various component of the plant the current average production capacity stands at 6,800 meter cube per day whilst the demand in the supply area currently is over 27,000 meter cube per day creating a huge deficit between supply and demand that warrants urgent expansion of the current Water Treatment plant (WTP).

She said the numerous challenges of huge deficit in water supply results in long waits by customers for water to intermittent supply which occasions water supply rationing programmes, old distribution networks that results in frequent bursts resulting in losses to the company, would be a thing of the past after completion of the project.

Dr. Cliford Braimah, Managing Director of the Ghana water Company (GWCL) thanked government for the project to improve the present water supply situation in the area.

He said the GWCL shares the concern of the people in Sunyani in the implementation of water rationing to some areas which was due to the increase in population growth.

Dr. Braimah entreated the beneficiary communities to contribute their quota towards the sustainability of the project by protecting the water supply project infrastructure and prompt payment of water bills.