By Lyn Johnstone - The Conversation 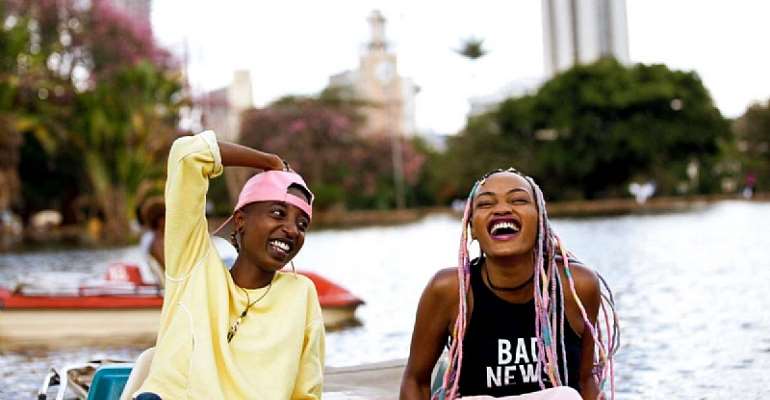 In a 2017 TED Talk , the Kenyan film director Wanuri Kahiu shared her mission to make what she called “Afrobubblegum” art. The aim is to contribute to a world where African audiences see themselves reflected in ways that capture a full range of human experiences. To go beyond agenda-driven single stories of war, famine and HIV that have characterised much storytelling about Africa.

Put simply, to tell stories where Africans are “loving and thriving and living … beautiful, vibrant lives” with the aim of creating among audiences a feeling that African lives are “worthy of more happiness”.

In 2018, Kahiu took Afrobubblegum's aim and queered it in the form of Rafiki , a vibrant film that tells the story of two young Kenyan women who fall in love.

Same-sex sexual expression is prohibited in Kenya. The legal framework continues to deny the possibility of queer existence. In addition, government officials as well as religious leaders uphold a discourse of anti-homonationalism – to exclude queer-identifying people from the imagination of the nation. Rafiki was accused of promoting homosexuality and swiftly banned by the Kenyan Censor Board.

Much of the international media focus has been on Rafiki's ban in terms of the law and human rights . What has received less attention is the fact that, in telling an upbeat story of two women in love, Kahiu successfully achieved in 83 minutes something the Kenyan government remains unwilling to do: include queer Kenyans in the national imagination.

There's a growing body of African films that tell queer stories, but Rafiki is one of the first feature-length films that fully celebrates queer love while also offering a glimpse of a future through the film's happy, hopeful ending. This, I argue , gives the film radical worldmaking potential. And as Kahiu's star rises, she brings with her a more hopeful narrative for Black life.

Rafiki is the first Kenyan film to screen in competition at the Cannes Film Festival.

Queer worldmaking describes the many ways in which heterosexual social structures have been challenged with the aim of creating a more equitable world in which queer people might thrive.

For some years in Kenya, a number of artists, writers and scholars have been engaged in worldmaking processes. Artists such as Neo Musangi , for example, whose performance art challenges gender normativity. Writers like Kevin Mwachiro and the late Binvavanga Wainaina whose writings on their experiences of being gay have effectively, in the words of Chimamanda Ngozi Adichie

Like Kahiu with Rafiki, they have created a visual affirmation of queer existence that is often considered an important step in the worldmaking process.

There are several scenes in the film that are particularly significant for the way that Kahiu brings together hope and horizon in the plot and narrative.

In one, the lovers Kena and Ziki are alone on a rooftop discussing their plans for the future. Kahiu weaves together dreamy visuals with lingering glances as the young women gaze both at each other and at the horizon in ways that signal to queer-identifying audiences that there is hope for the future. Kena chats to friends as Zika approaches - their paths cross when their fathers become political rivals. Big World Cinema/Afrobubblegum

In another scene I analyse, the lovers are in a park, having fun in a paddleboat on a lake – showing queer-identifying people occupying public spaces around the neighbourhood. The Kenyan state's official stance around homosexuality – that it is “unnatural” and “unAfrican” – together with the continuing criminalisation of queer bodies, makes this scene an important tool for queer visibility. It's followed by the lover's first date, in a nightclub. Here queer love and desire take centre stage in terms of visibility as they share their first kiss.

In the film's final scene we see Kena standing on a hilltop. She's just received news that Ziki has returned after being sent overseas by her parents as punishment for her lesbianism. In the closing scene, therefore, when we see a hand on Kena's shoulder, we deduce from the smile on her face that this hand belongs to Ziki. In this way, Rafiki's viewers are left with a glimpse of a happy ending that, to date, remains rare in the global queer film canon.

This, I argue, is truly Afrobubblegum in action.

My analysis is not confined to scenes from the film. The banning and later unbanning of Rafiki by the Kenyan courts also created a situation where the Afrobubblegum effect could be observed in action.

Beyond the cinema screen

Kahiu sued the Kenyan authorities and won the right to screen Rafiki for a period of seven days. This is a prerequisite for eligibility for entry into the best international film category at the Academy Awards. Following the lifting of the ban, Rafiki was shown to packed cinemas in the Kenyan cities Nairobi, Mombasa and Kisumu.

I gathered data from media coverage of the screenings. A good deal of this was from interviews with queer cinema-goers who had gone to watch .

A pattern emerged of queer viewers describing their excitement at seeing themselves reflected on the screen positively. But beyond this, they described how, by the very act of attending the screenings, they felt a sense of community, friendship and belonging in a state where they are commonly excluded from the national conversation.

Nor does the worldmaking potential of Rafiki and its director end there. The success of Rafiki has helped Kahiu land projects in the US, where she is set to direct an adaptation of Christina Hammond Reed's novel The Black Kids . She is also adapting Octavia Butler's book Wild Seed into a film.

In this way, her aim to tell positive stories about African and Black lives continues to inspire hope in audiences. Her work is particularly inspirational to African, African American and Black women.

Inside Politics: Political Quotes
Catch up with all the political quotes from our politicians.
Sponsored
More Article
Modern Ghana Links
Get more women into governance, Mr President !
Our 'whom you know' canker
Rawlings, The Tribute: The tenderness in his toughness
Ghana's unstable building problem is about more than lax regulation
How Kenya's new personal data protection law could affect researchers
Pasha 92: How we discovered two new giant radio galaxies
How young Kenyans feel about farming goes against conventional wisdom
Jonas Gwangwa embodied South Africa's struggle for a national culture
The approved covid-19 vaccines: Series of clinical trials is the way to go in Ghana
Election Reports Quotes Dossiers
TOP STORIES