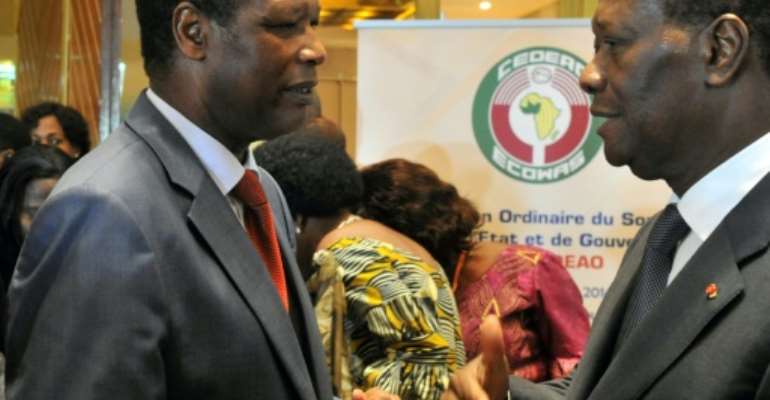 The African Union's former envoy on Mali, Pierre Buyoya, pictured left at a West African summit in Ivory Coast in March 2014. To the right is Ivorian President Alassane Ouattara. By ISSOUF SANOGO (AFP)

Burundi's ex-president Pierre Buyoya said on Wednesday that he had quit as the African Union's envoy to Mali to clear his name of alleged involvement with the murder of his successor.

Buyoya resigned from his diplomatic position on Tuesday after being convicted in absentia in his native Burundi for the 1993 assassination of then president Melchior Ndadaye.

Speaking at a press conference on Wednesday in Mali's capital Bamako, the 71-year-old said he had stepped down voluntarily.

Buyoya served as the African Union's envoy to troubled Mali and the Sahel region from 2012.

"I considered it preferable to free myself from these responsibilities in order to have full freedom to defend myself and clear my name," he told reporters.

"I also said that this situation could hinder" the AU, he said.

Buyoya, an ethnic Tutsi, first came to power in Burundi in a coup in 1987.

He stepped down in 1993 in the former Belgian colony's first democratic elections in which Ndadaye, a Hutu, beat him resoundingly.

The murder plunged the East African nation into years of civil war between the majority Hutus and minority Tutsis that left an estimated 300,000 people dead by the time it ended in 2006.

On October 20, a court in Burundi's capital Bujumbura handed down life sentences to Buyoya and 18 other defendants for their alleged roles in Ndadaye's killing.

Buyoya has rejected the verdict and dismissed the case against him as politically motivated.

He said on Wednesday that he would use "all possible means to make the truth triumph," but added "I have not chosen a country (to request) political asylum."

The African Union has not yet commented on Buyoya's legal troubles.

Why are you refusing to obey the orders of the Court ? — Jus...
53 minutes ago