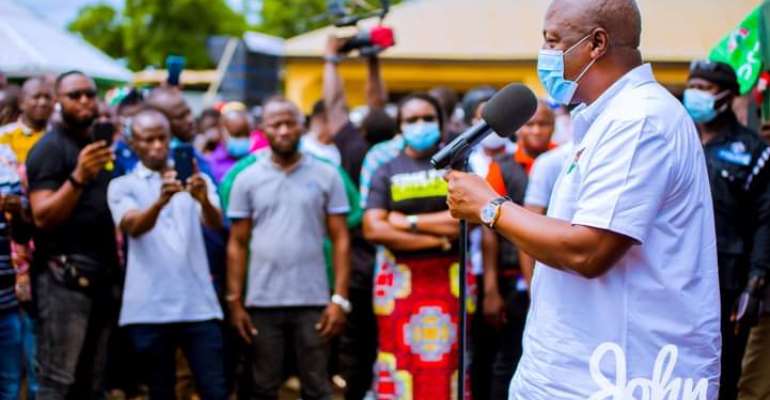 Former President John Mahama has described the New Patriotic Party (NPP) government as one that has rendered Ghana a “hell-hole instead of paradise.”

He says the incumbent government has not been able to fulfil the numerous lofty promises it made to Ghanaians prior to the 2016 elections.

Speaking at a rally at Navrongo in the Upper East Region, John Mahama indicated that President Akufo-Addo must be voted out for failing to honour his promises.

“For us, every time we have seen development and progress in our part of the country, it is when NDC is in government. When NDC goes out of government, the country comes to a standstill. Everything comes to a stop when NDC leaves office. What is the nature of our lives over the last four years? We have gone for a government so that the government comes into power to improve our lives, and you have voted and the quality of your lives in going in reverse, then you have to vote the government out”, he said.

According to the former President, the Akufo-Addo administration is a scam insisting that the current government has not performed well enough to be retained.

“Ghanaians were made to believe in a certain packaged product to see the NDC government as incompetent as demons as evil as everything, and then they were a group of saints and angels who have just descended from heaven, and they were going to change everything in Ghana and make Ghana a paradise. Instead of paradise, they have turned Ghana into a hell-home. What happened to all the promises?” he quizzed.

Mr. Mahama also slammed the Akufo-Addo government for the job losses the financial sector clean up left in its wake.

“This government has destroyed more jobs than it has created. The only job they can point to is NABCo, and yet they have destroyed more than 10,000 jobs in the bank sector.”

He cited Groupe Ndoum's GN Bank as an example of an institution purportedly failed by the state.

“All the GN banks used to have staff in them all over the country. Today where are those staff? They are all sitting at home.”