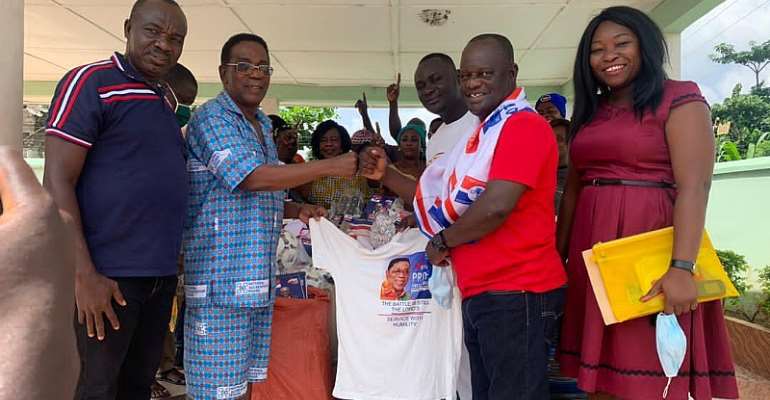 The China Branch of the New Patriotic Party (NPP) on Tuesday, 24th November 2020 donated items valued at US$9,000.00 to support the campaign activities of one of their adopted constituencies, the Agona East Constituency.

Again, the NPP China branch presented a citation to Professor Kwesi Yankah, the parliamentary candidate for Agona East for championing development in the area.

The Chairman of the NPP China Branch, Mr Ben Owusu Achiaw, in his speech, stated that the donation is their contribution towards the 2020 campaign in the area.

He added that the support will solidify a strong relationship between the NPP China branch and Agona East constituency.

He expressed the hope that the donation will go a long way in aiding the campaign efforts to ensure another gargantuan victory for President Akufo-Addo and the parliamentary candidates in this year’s elections.

Receiving the items, the Parliamentary Candidate for Agona East consistency on the ticket of New Patriotic Party- Professor Kwesi Yankah thanked the China Branch for the gesture and expressed the hope that such gestures would be extended to other constituencies so as to ensure a massive victory in this year’s elections.

He promised to make sure the donation get to the grassroots members of the NPP Agona East constituency to effective conduct their door to door campaign activities.

Latest Photo Reports
Catch up with all the political quotes from our politicians.
Advertise here
More NPP News
ModernGhana Links
Disgraceful NPP could find money for 'useless' things but none for 27 Mahama E-blocks – Ablakwa jabs government
“I came back from exile and I’ve served NPP faithfully, loyally and hard’’ — says Boakye Agyarko as he declares intention to lead NPP into 2024 polls
A/R: We don't want a Chairman who display gold on TV but neglect his boys — NPP Delta Force members hoot at Wontumi at delegates conference
Ashanti Regional NPP holds delegates conference
Former NPP MPs want voting rights in party elections
A/R: Am your Messi, kick me out from NPP and you'll suffer like Barcelona in 2024 – Chairman Wontumi warn delegates
'We can't complete all E-blocks at once; we came with our own agenda' – Former Adentan NPP PC
Fuel price hikes: NPP's ghost haunting them – Victor Quarshie
Collins Nuntwiri Nuamah set run for NPP’s National Treasurer , Gets Resounding Reception Across Country
TOP STORIES

Akufo-Addo government most lawless Ghana has ever had – Nyah...
15 minutes ago

A/R: We don't want a Chairman who display gold on TV but neg...
37 minutes ago