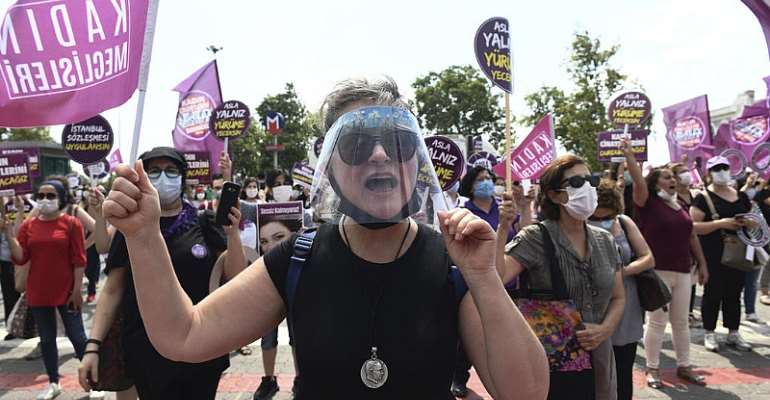 The United Nations says lockdowns intended to stop the spread of the coronavirus have lead to an increase in violence against women, especially domestic violence across the globe. Although France has put in place several measures to combat this trend, more needs to be done.

The UN has labelled the rise of violence against women and girls during the Covid-19 outbreak “the shadow pandemic” referring to the fact that while health services have been overwhelmed with treating Covid patients, other victims were quietly forgotten.

This year's theme for the International Day for the Elimination of Violence against Women is “Orange the World: Fund, Respond, Prevent, Collect!”.

Like in previous years, this year's International Day will mark the launch of 16 days of activism that will conclude on 10 December 2020, which is International Human Rights Day.

According to the United Nations, the pandemic has aggravated the plague of sexual and domestic violence, this in part because women found themselves trapped at home with a limited access to services.

The closure of businesses and schools, as well as cultural and athletic activities, have deprived victims already weakened by economic insecurity of ways to escape violence, while the closure of courts has slowed down access to legal systems.

The French Interior ministry reported a 36% increase in the number of complaints related to domestic violence during the eight week Covid lockdown in March and April.

Women Safe is a French organisation dealing with the myriad of violent or coercive situations women and children face since 2014.

By applying a combined approach of medical, logistical and legal support they aim to find long term solutions.

Children a priority
The organization reported an increase in demand on their services, reporting that they helped nearly 300 women and children between mid-March and the end of May, the equivalent of seven months of their usual activity – a 250% increase compared to the same period in previous years.

During France's second lockdown, which started at the end of October, Women Safe instigated a public fundraiser to help their campaign dubbed “Home Safe” to boost their services.

In particular, the group said children should “not be left behind in what is a major health crisis.”

“The impact of violence has devastating consequences on the physical and mental health of each individual, and it's necessary to anticipate this and respond from the first minute,” Frédérique Martz, Director and Founder of the Women Safe Institute said in a statement.

Online campaigns
Women's advocacy groups and governmental bodies have turned to online information campaigns such as the platform "Arrêtons les violences" (Stop the violence) to communicate with victims or potential victims.

On Saturday, several hundred people joined activists from the group #NousToutes (all of us) lead by Caroline de Haas to participate in a series of  exchanges on social media with workshops, conferences and even live concerts.

The idea was to get momentum going and reach out to a younger audience.

"What is the Macron government doing?" asks Nous Toutes, inviting women to respond to an online poll via their Twitter page.

Mobilisation on 25 November remains uncertain owing to restrictions linked to the pandemic, but women's groups are adamant their voices should be heard online.

Small steps forward
French leader Emmanuel Macron made a campaign promise to improve France's record on eradicating violence against women and set up a forum with women's groups and community partners in November 2019.

One of the measures taken was advocating a national helpline 3919 which according to a governmental report recorded 44 235 calls between 16 March and 11 May. This service is due to be expanded in due course, but has also been opened to competition, a move which has been harshly criticised by women's groups such as Nous Toutes.

In September 2020, electronic bracelets were introduced to keep violent partners or ex-partners at a distance from their victims.

France's minister for equality, says a thousand new places have been created in emergency shelters for those fleeing domestic violence, and 16 specialist regional centres have been opened to deal with perpetrators.

However, women's advocacy groups say this has yet to translate into a concrete response.

Some French associations established contact points in supermarkets and a network of pharmacies was established to allow women to report violence.