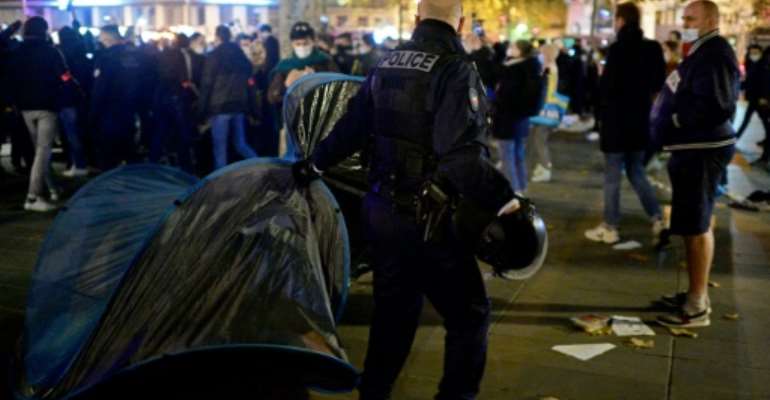 Police removed the tents, sometimes with people still inside, in the face of protests from migrants and jeers from activists. By MARTIN BUREAU (AFP)

French authorities on Tuesday ordered an investigation into the "brutal" removal by police of a camp of migrants in central Paris, as parliament gave initial approval to a new security law condemned by activists as eroding press freedom.

Interior Minister Gerald Darmanin said he had ordered that an investigation into the handling of the removal of the migrants late Monday from the Place de la Republique be taken up by the National Police Inspectorate General (IGPN).

The government was already facing a storm of criticism over the security legislation, which critics say shows that the government of President Emmanuel Macron is veering sharply to the right.

The lower house of parliament Tuesday evening gave initial approval to the legislation -- which would restrict the publication of photos or videos of police officers' faces -- although it still faces further legislative hurdles.

Officers used tear gas to break up the Paris camp, which was set up to protest against earlier forced evacuations of hundreds of migrants from other camps.

Volunteers had helped erect about 500 blue tents that were quickly filled by migrants, the majority from Afghanistan.

Police arrived shortly afterwards to remove the tents, sometimes with people still inside, in the face of protests from migrants and jeers from activists.

"They are too violent," said Shahbuddin, a 34-year-old Afghan, crying after being evicted. "We just want a roof." 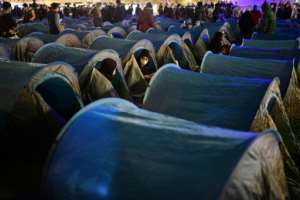 The tents were set up to protest at the destruction of other migrant camps. By MARTIN BUREAU (AFP)

Police later used tear gas and rough tactics, with videos posted on social media showing one officer tripping a man as he ran, and another officer slamming into a man who tried to intervene.

The controversy comes a week after migrants were evacuated from makeshift shelters in the northern suburb of Saint-Denis, including some who were not provided with alternative shelter.

"The state has made a lamentable show," Ian Brossat, a Paris deputy mayor in charge of housing, told AFP.

CFDT trade union chief Laurent Berger told France 2 TV that the actions of the police were "scandalous and astounding."

"People occupy a square peacefully with tents, simply because they have a housing problem, they are not harming anyone. And there is this intervention which is totally disproportionate," he said.

After receiving a report from Paris police chief Didier Lallement confirming "several unacceptable facts", Darmanin -- who had earlier described some of the images of the camp's removal as "shocking" -- said that the IGPN would submit its findings within 48 hours.

Paris prosecutors meanwhile opened criminal probes into alleged use of violence by a person in authority over the tripping incident and complaints by a journalist he had been aggressed.

Paris' Socialist mayor Anne Hidalgo wrote a letter to Darmanin denouncing the "brutal and disproportionate use of force" by the security forces, which she said was "unfortunately not without precedent" in the city.

'Didn't vote for this'

The National Assembly lower house, controlled by supporters of Macron, passed the security bill with 388 in favour, 104 against and 66 abstentions.

It still must go to the upper house Senate in January, and Prime Minister Jean Castex has also pledged to seek the approval of the Constitutional Court.

Media unions say it could give police a green light to prevent journalists from doing their work and potentially documenting abuses.

Macron swept to power in 2017 as a centrist who rallied support from across the political spectrum. But critics and even some supporters accuse him of tilting to the right as he seeks re-election in 2022.

A group of public figures who voted for him in 2017 wrote an open letter this week calling for the legislation to be withdrawn.

The law would "reduce the freedoms of information, opinion, belief, education, association, demonstration and protest," said the signatories, who included filmmaker Costa-Gavras and ex-footballer Lilian Thuram.

"Mr President, we did not vote for this."

With Macron supporters still controlling the National Assembly, the lower house is expected to give its green light to the new legislation.

But in a nod to the controversy, Prime Minister Jean Castex said he would seek the verdict of France's Constitutional Court on the contentious article 24 about the publication of images.

In a rare rebuke to Paris from the EU headquarters in Brussels, the European Commission said on Monday that news media must be able to "work freely."

There is possibility of a lockdown, other restrictions – Opp...
44 minutes ago