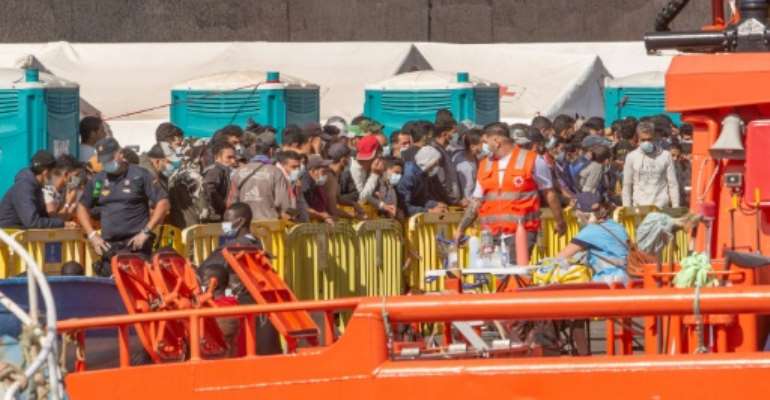 More than 18,000 people have landed on this Spanish archipelago over the past year. By DESIREE MARTIN (AFP/File)

After three years, Said El Hallaji finally got to hug his brother Lehcen as they were reunited at Arguineguin, a once-quiet Canary Islands port now overwhelmed with migrant arrivals.

More than 18,000 people have landed on this Spanish archipelago over the past year, some two thirds in the past few months, after taking a perilous boat trip from the African coast.

Many come from Morocco, like Lehcen who was hoping to be reunited with his brother, a seasonal agricultural worker based in Murcia in southeastern Spain who flew in to meet him.

"We haven't seen each other for three years," says Said El Hallaji wearing a mask with a Spanish flag, who's confident he will be able take his brother back with him to mainland Spain.

Monday was a busy day at Arguineguin on Gran Canaria, the archipelago's largest island, with 150 people arriving in five boats while buses shuttled hundreds of others to places to stay.

A temporary camp set up at this small fishing port to process new arrivals and test them for the virus has been totally swamped.

A migrant arrives at the port of Arguineguin. By DESIREE MARTIN (AFP/File)

Currently there are 600 people there, down from a peak of more than 2,000 earlier this month, most sleeping rough in conditions denounced by rights groups and which a judge declared to be "deplorable".

This year, arrivals have soared to more than 10 times the level of 2019 after EU agreements with Turkey, Libya and Morocco cut off other popular routes to Europe.

The current influx has echoes of the crisis of 2006 when 30,000 migrants reached the archipelago, prompting Spain to step up patrols and ink repatriation agreements.

And Spain is once again picking up the diplomatic pace, seeking to stem the departures at source and revive repatriation efforts that have been frozen by the Covid-19 pandemic.

At the same time, island officials are working to ease conditions at Arguineguin by moving migrants into tourist accommodation left empty by the virus or to camps set up by the military which can sleep up to 7,000 people.

With the existing migrant accommodation overwhelmed, new arrivals are being housed at 17 hotels and tourist complexes such as Vistaflor, which lies between a golf course and the dunes of Maspalomas some 20 kilometres (12 miles) from Arguineguin.

Wandering around outside is a group of Malians who arrived on October 31 and have finished their 14-day quarantine period.

"Being on the boat was really hard, horrible, for three days we had no water and nothing to eat, so we drank sea water," says Abdulai, a 31-year-old who did not want to give his family name.

"It was worse (back in Mali), with political problems, the war too, and even worse with the pandemic," says his friend Casama.

"Here things are calm and we're very grateful," he says as they wander off.

More migrants are housed at the nearby Waikiki hotel, which has more than 500 rooms.

While in quarantine, they are not allowed to leave nor use the communal pool, so they spend their days on the balconies, chatting.

Although a large Spanish flag hangs from one of the balconies, their presence has left locals unsettled.

Migrants board a bus to be transferred to their accommodation after being rescued by the Spanish coast guard in the Canary Island of Gran Canaria. By DESIREE MARTIN (AFP/File)

"It's doing a lot of damage having them here. We have had emails from as far away as Finland to ask how far we are from the migrant hotels. And we can't lie," says Luciano RodrÃ­guez, owner of the nearby Guarapo restaurant.

"The tourists don't feel safe. I haven't seen anyone breaking anything or attacking anyone but it creates uncertainty and impacts on reservations," he says.

Abdel Rostom, a Moroccan national who has lived on Gran Canaria, is also worried.

He came to Arguineguin to pick up "a friend's relative who arrived by boat to send him over to mainland Spain".

"He's been here a week and his mother has been on the phone day and night, begging us to get him out," he told AFP at the port, its jetty cluttered with canvas tents, plastic sheeting and two dozen portaloos.

Before leaving, he takes out his phone to film the arrival of yet another makeshift boat, those on board disembarking on the jetty.

Some are shirtless, others are barefoot, all exhausted from the rigours of the journey but grateful to be back on dry land although for most, that will mean sleeping on the floor for several days until an alternative can be found.