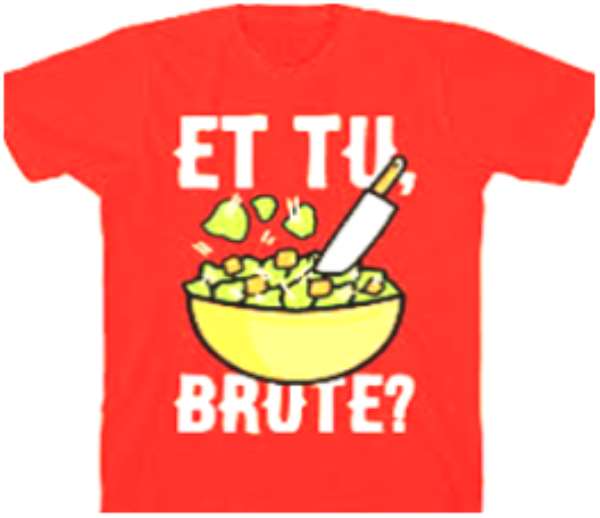 In William Shakespeare’s play dubbed Julius Caesar, Brutus is portrayed as a close friend of Caesar. However, the same Brutus conspires in assassinating Caesar who is a Senator. Having realized that his bosom friend is one of his assassins, who pierce him with a dagger, Caesar remarks shockingly, Et tu Brute? This translates to ask that Even you Brutus? Even Brutus my close friend is part of my killers? This Caesarean question resonates with the Eʋe name, Aƒemeku, meaning death from within one’s own home, family or inner circles. The treacherous behaviour of Brutus led to the coinage of the adjective, brutal or brutish. It means cruel, insensitive, traitor, ruthless or unhuman. In fact, the character of Brutus mimics that of Judas Iscariot who betrayed Jesus his Rabbi with a kiss in the Garden of Eden. The only difference between the Jesus and the Caesar betrayal scenarios is that Jesus had foreknowledge of the betrayal but did nothing to prevent it because he wanted the will of God done to him even to the point of death. Caesar on the other hand is not omniscient like Jesus so he has no foreknowledge of the conspiracy by Brutus and others to kill him. Let me reiterate that I use present tenses in narrating the Brutus-Caesar story because in Drama or Literature study, the events are not considered as historical or past events so they are not recounted in past tenses but in present tenses instead.

In this article, I have analysed the modern day Brutus characters in our workplaces and their impact on job satisfaction. Whereas some are supervisors or bosses, others are colleagues and subordinates. They influence how satisfied or otherwise you are with your job. This article does not seek to say that there are no good bosses, colleagues and subordinates. In fact, there are very good ones that help to propel your career growth.

When a Brutus Figure is Your Boss

It should not be lost on a worker that society is full of many characters who blend cacophonously to make the various music we dance to daily. In much the same way, one should not be surprised to have been supervised by a Brutus or brutal boss. A Brutus boss will feign his love for you or for your progress or performance but still stab you behind. He or she will stab you by ensuring that you are not promoted for years or frustrating your progress but still make you believe that some other person (s) are responsible for your downfall.

The Brutus boss hides behind others to harm you. He or she tarnishes your image and will never project your initiatives on any platform to celebrate you. His or her face beams with love for you yet he or she does not truly love you. You are like Caesar so you think your Brutus boss cares about you so much. You are not omniscient like Jesus so you are not able to know that your boss is your Julius Iscariot. This is why Shakespeare says, “There is no art to find the mind’s construction in the face.” Eʋes say, Aɖukonu Dɔmetɔ le Vovo, shortened as Aɖukonu or Dɔmelevo . To wit, that he laughs with you does not necessarily means he loves you. Facial expressions do not necessarily depict thoughts.

When a Brutus Figure is your Colleague

Quite apart from your boss, some of your working colleagues can become the Brutus that stabs the Caesar in you to death by conspiracy. They compete for the same promotion or progress you deserve. As double-edged swords, they feign love for you but destroy you to the boss. Some even craftily steal your achievement or work output and make it theirs because they are closer to the boss than you are. They lie to the boss about you and determine your fate wrongly.

Take persistent note of the fact that they are the same colleagues who wish you well on your birthday every year, cut cake in your honour, sing for you and pray fervently that you should progress. In their closets however, they conspire tirelessly against you to ensure that the same progress they beseeched God to deliver to your life on the job does not happen.

Some colleagues also behave as though your salary increment will be funded with their salary and as though your progress will deny them their daily bread. They are Brutus and Judas Iscariot lurking around the Caesar and Jesus respectively in you. Beware of them. Be mindful of them in disclosing your plans of progress to others.

The Brutus colleagues can equally be termed as Macbeth colleagues. In William Shakespeare’s Macbeth, the characters Macbeth and Banquo are two Scottish Army Generals who have been promised royalty by three apparitions called witches or weird women. Whereas Macbeth is assured that he will be King, no man born of woman can kill him and until Birnamwoods move to Dunsinane Macbeth will not die, his colleague and friend Banquo has been told that he will not be King but his descendants will be King even up to the twelfth generation.

Fear of Banquo’s descendants’ accession to the throne makes Macbeth kill his close colleague and friend, Banquo. This is indeed Aƒemeku (home death) as Eʋes would call it. Death from within your close circles. Sometimes, the death may be symbolic because it is in the form of something that stagnates your career progress.

When a Brutus Figure is Your Subordinate

Sometimes, the Brutus around you is neither your boss nor your colleague. He or she is rather the person(s) you supervise at work. The Brutus subordinate figures can tarnish your image before your employer. In fact, some of these treacherous subordinates are sometimes closer to your boss or your employer than you are. They want you to dance to their whims and caprices and if you do not, they stab you with a dagger from behind.

They assassinate your character and even if they have the chance, they will poison you to death. It may be difficult for you to suspect them because they feign loyalty and respect in your presence. You only have to read in between the lines. Lucky Dube sings, “Your smiling cannot fool me no more because I know of your back biting… Not every black man is my brother, not every white man is my enemy…”

The Somnambulistic Consequences of Being a Brutus

Modern day Brutus, Macbeth or Judas Iscariot still work with us daily. We need to decipher when dealing with people. Some destroy you without even knowing they do so. They do so by naïve oral diarrhoea. They unintentionally disclose your plans you confided in them. Some do so with pride to score a point that they are better than you are. Your job satisfaction does not only depend on your salary and other conditions of service but also people around you and the inter-personal relationships you have with them. Whereas some make you satisfied on the job, others are also serve as your factors of job dissatisfaction. May the Lord God open your eyes to know the Brutus, Iscariot or Macbeth around you.