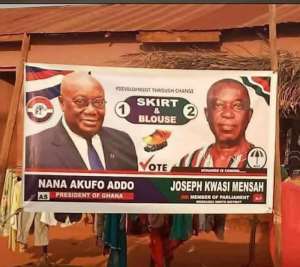 Angry New Patriotic Party (NPP) youth at Kranka in the Nkoranza North constituency have vowed to vote 'skirt and blouse' in the upcoming December 7 elections.

The disparate group of young men have clearly stated that even though they love the party and will do everything in their capacity to help the party retain power, they can no longer tolerate the current Member of Parliament for the constituency, Hon. Derrick Oduro.

The youth explained that the constituency has benefit nothing in the 14years of Derrick Oduro's leadership. They said not only has the Deputy Defence Minister failed to lobby for any developmental project for the constituency, but he has also failed to bring unity among members of the party.

The group added that the minister has made series of derogatory comments to many communities in the constituency in his recent campaigns. They indicated that his comments has tarnished the party and made it unpopular. "The earlier we remove him from power the better for us."

The youth continued that about two weeks ago, the MP witnessed a total rejection at Kranka where he intended addressing the community on his campaign message. In a video that went viral on social media, there was a great hooting among the crowd, most of them shouting "away, away" as the community express their vexations towards him.

As if that was not enough, the youth have gone ahead to print a banner demonstrating how they will cast their votes on December 7. On the right side of the banner is the image of President Akuf-Addo and on the left is that of the NDC parliamentary candidate Hon. Joseph Kwasi Mensah.

Let's commend Bagbin for his tenacity, firmness during 2022 ...
10 minutes ago