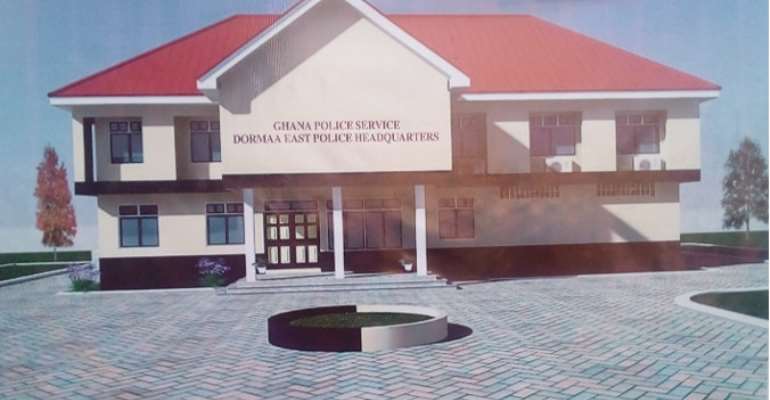 The Member of Parliament for Dormaa East Constituency in the Bono Region, Hon Williams Kwasi Sabi on Sunday, November 22 cut sod for the commencement of a 2-storey Office Complex to serve as the District Police Headquarters.

The building upon completion is expected among other things to ensure maximum protection and give the district a befitting status.

The current structure which serves as the District Police Head Office was built 68 years ago by the then chiefs and people of Wamfie (now the capital of the District) as a police post to provide security for the area and neighbouring communities and has since, seen just a little improvement.

Its apathetic nature has deterred a formidable security force for the developed area over the years.

The new edifice which is part of the 1 million dollars per constituency projects of the District, will among other ancillary facilities comprise of administrative and CID offices, charge and common rooms, stores and waiting areas with its first phase expected in 6 months.

In a short ceremony to commence the project, the MP for the area, Hon. Williams Kwesi Sabi gave a tall list of his achievements in his 8years of office with the major ones still under construction.

The achievements include doctors’ bungles, unit of classroom blocks, boreholes, toilet facilities, District NHIS office, Fire Services Station, Ambulance Bay, and many others of which some like a 60 bed District Hospital and a Radio Station yet to start.

He reiterated that the presence of a modern-day District Police Headquarters would beef up security and give the District a facelift.

He added that though he would not be in office as MP from the next administration, he would continuously pursue endeavors in favour of the District and support its development in every capacity.

He noted that major of his achievements for the District accrued during the first four years of the Nana Addo led government and therefore advised his followers to vote Nana Akuffo Addo and his successor Mr. Paul Twum Barima into power come December 7th, so that the District would be better off.

He also pledged his support for the newly elected NPP Parliamentary Candidate, Mr. Twum for the sake of the District’s Development.

The District Chief Executive, Hon. Emmanuel Kofi Agyeman commended the Nana Addo led government for the numerous development the District has received since they came to power.

He recounted the various robbery cases which bedeviled the District last year due to limited police post and men.

He thanked the government for several police posts currently in the district and the ongoing district police stations as well, he was very optimistic the police headquarters to be constructed would among other initiatives underway facilitate the getting of a Divisional Police Command soon.

The DCE appealed to all and sundry to retain the NPP government for the development of the District.

The District Police Commander, DSP Francis Kwesi Asante who was grateful and happy to be part of the historic event, narrated the history of the current District Police Station saying that their names would also be found in the annals of the district in relation to the new project.

He thanked the authorities of the District and Government for the befitting Police Headquarters and added that it would go a long way to ensure the development of the District.