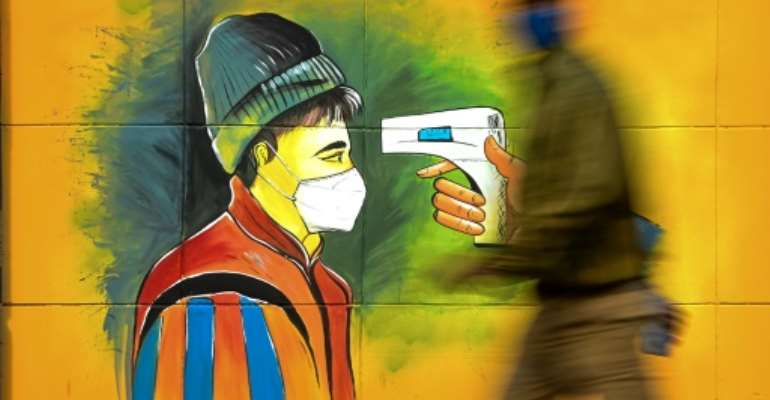 Hopes over Covid-19 vaccines have given a boost to virus-weary citizens across the globe, but the disease remains rampant and world leaders are urging people to be patient. By Sajjad HUSSAIN (AFP)

France is expected to loosen its coronavirus restrictions on Tuesday as the boss of a major airline said proof of vaccination will likely become the only way people can fly in a post-pandemic world.

Hopes over Covid-19 vaccines have given a boost to virus-weary citizens across the globe, but the disease remains rampant and world leaders are urging people to be patient.

French President Emmanuel Macron will address the country -- currently under lockdown -- to announce a reworking of the rules following a drop in nationwide infections.

One week of new Covid-19 cases. By Omar KAMAL (AFP)

Macron's televised speech comes a day after British Prime Minister Boris Johnson said thanks to a major vaccine breakthrough, "the escape route is in sight" from the coronavirus crisis.

Johnson said that although the "scientific cavalry" was arriving, he warned "Christmas cannot be normal and there's a long road to spring".

The world is still engulfed in the unprecedented health crisis which has shattered economies, infected almost 58.9 million people and left nearly 1.4 million dead.

AstraZeneca and Oxford University on Monday said their drug had proved on average 70 percent effective at stopping the virus after trying it on 23,000 people, days after tests of two other drugs suggested they were more than 90 percent effective.

Gravediggers work during a funeral for a COVID-19 victim in Bogor, Indonesia.. By ADITYA AJI (AFP)

While World Health Organization director-general Tedros Adhanom Ghebreyesus hailed the latest batch of results as light at the end of the "long dark tunnel", he cautioned the world had to ensure drugs were distributed fairly.

"Every government rightly wants to do everything it can to protect its people," Tedros said. "But there is now a real risk that the poorest and most vulnerable will be trampled in the stampede for vaccines."

Australia's Qantas announced that international travellers will need to be vaccinated against Covid-19 to fly, becoming the first airline to suggest such rules could become common across the industry.

Two 12-year-olds sit in front of Italo Calvino school in Turin as they protest against school closures because of government restrictions over the Covid-19 pandemic. By Miguel MEDINA (AFP)

CEO Alan Joyce said the Australian flag carrier would implement the measure once a vaccine was made available to the public.

"Whether you need that domestically, we will have to see what happens with Covid-19 in the market but certainly, for international visitors coming out (to Australia) and people leaving the country, we think that is a necessity." he told Channel Nine.

Joyce predicted the rule would likely become standard practice around the world as governments and airlines consider the introduction of electronic vaccination passports.

Meanwhile, Australia's Victoria state announced Tuesday its last coronavirus patient had been cleared of Covid-19 -- a major milestone for what had been the epicentre of the country's second wave.

An outbreak in Melbourne, Victoria's capital, sent Australia's second-biggest city into a strict months-long lockdown, with residents subject to a curfew and mandatory mask rules.

Authorities have now reversed the toughest of the restrictions and other states have begun reopening their borders to Victoria, with New South Wales the first to do so Monday.

The United States -- by far the worst-hit nation -- celebrates Thanksgiving on Thursday, and many Americans plan to spend the holiday with extended family despite authorities warning they risk exacerbating the disease raging across the country.

Nurses hold candles during a vigil for healthcare workers who died from Covid-19 organized by California Nurses United outside of UCLA Medical Center in Los Angeles. By Patrick T. Fallon (AFP)

Nearly 258,000 people have died nationwide and the caseload is edging towards 12.4 million, according to Johns Hopkins University.

Stopping short of issuing an outright ban, the US government's health protection agency has for the first time called on Americans not to travel for the annual holiday, which sees families get together over turkey, yams and cranberry sauce.

British Prime Minister Boris Johnson's latest plan is to roll out mass testing to the hardest-hit areas, hoping to make enough inroads to be able to relax social restrictions in time for Christmas. By Tolga Akmen (AFP)

Last weekend was the busiest since the start of the pandemic with more than three million people passing through US airports, according to the Transportation Security Administration, which is responsible for security checks.

"Our pleas for help have fallen on selfish deaf ears," tweeted Cleavon Gilman, an emergency doctor in Arizona, where he said hospitals were "overwhelmed" with Covid patients.

Football fans in England can look forward to cheering on their Premier League teams from next month, but only a highly limited number of supporters will get through the turnstiles.

A maximum of 4,000 people will be allowed to watch games in areas of the country under the least stringent rules.

"Clubs, leagues and the Sports Ground Safety Authority have worked hard to put in procedures to make stadiums safe places and we hope this is the first step on the road back to normality," said the Football Supporters' Association.