On Mahama’s 2020 candidacy: Who is not scared of the unspeakable dumsor? 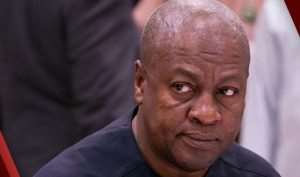 It would only take a doubting Thomas or a disputatious character to suggest that discerning Ghanaians have soon forgotten and forgiven Mahama for collapsing businesses through dumsor for well over four years.

We cannot, therefore, deny or ignore the fact that for well over four years, dumsor, unfortunately, crippled businesses as a result of the mismanagement of the economy by the erstwhile Mahama administration.

The dumsor was so irritating to the extent that my uneducated, albeit reflective thinking mum, who had a soft spot for NDC, underwent a carefully considered reflection and graciously detached herself from the Umbrella fraternity.

I recall prior to the 2016 general elections, I had an interesting telephone conversation with my mother about politics and socio-economic standards of living in Ghana.

In fact, at no point in time during our interesting conversation that my mother indicated her willingness to detach herself from her unbridled loyalty to the NDC.

It, therefore, came as a surprise to me, when my mother confided in me recently that she has ceased being a die-hard supporter of the NDC.

Well, wonders shall never end, they say. In fact, I never envisaged in a million years that my mother could one day cease being a brassbound supporter of the NDC.

And what was her excuse for detaching herself from the Umbrella fraternity?

According to my mother, the straw that broke the camel’s back was the catalogue of sleazes and corruption amid the business crippling dumsor under the erstwhile NDC administration.

It is, therefore, quite disheartening to see the NDC loyalists whose businesses were wilfully crippled by Mahama’s appalling dumsor are squeamishly clamouring for the return of Ex-President Mahama and their beloved NDC.

Whatever the case, the loyal supporters of Mahama should accept the fact that discerning Ghanaians have overcome their supposedly memory loss and cannot so soon forget the terrible errors in judgement which culminated in economic hardships amid the business crippling dumsor.

It is absolutely true that the vast majority of unhappy Ghanaians voted against the NDC and Ex-President Mahama in the 2016 election largely due to the unresolved business crippling dumsor, the unpardonable incompetence and the wanton sleazes and corruption.

Gratifyingly, the previously mismanaged economy and the business crippling dumsor have since been brought under control by the NPP government under the able leadership of President Nana Akufo-Addo to the delight of discerning Ghanaians.

Whilst the Mahama loyalists are moving heaven and earth to help him reclaim the presidency in 2020, the sceptics, both outside and inside the NDC, are insisting that Mahama was not up to the task during his tenure in office and must thus be ditched and replaced with a competent leader to steer the nation to the right direction.

But whichever way you may view the issue under discussion, it is quite ironic that the brassbound Mahama loyalists do not want to acknowledge the fact that Ghana’s economy was in a mess because a large portion of the country’s resources went down the drain from mismanagement and the wanton corruption perpetrated by the officials of the erstwhile NDC administration led by Mahama.

With all due respect, it would appear that Mahama loyalists are living in a denial. They have indeed lost touch with the reality.

In fact, we do not have to look any further than the 2016 general elections results to acknowledge how Ghanaians were disgusted over Mahama’s dreadful errors in decision-making which brought about massive economic downslide.

In so far as the sceptics hold the preponderance of the argument about former President Mahama’s unpopularity, the diehard supporters will keep cheering him on.

Indeed, the vast majority of the NDC loyalists are living in a denial about former President Mahama’s perceived capability and popularity and will thus push him to his embarrassment in 2020.

But the all-important question every discerning Ghanaian should be asking the Mahama loyalist is: where is the justification about former President Mahama’s popularity and competence when his terrible errors in judgement sent Ghanaians into darkness for well over five years?

How can the diehard supporters convince some of us about former President Mahama’s ability to lead Ghana again when he woefully wasted Ghana’s scarce resources, including doling out huge sums of money to all sorts of people who contributed nothing to the nation-building. Madam Akua Donkor of Ghana Freedom Party comes to mind.

Well, the Mahama loyalists must accept the fact that discerning Ghanaians cannot so soon forget the dreadful errors in judgement which culminated in economic hardships amid the unbridled business crippling ‘dumsor’.

Suffice it to stress that the dumsor has since been contained by the NPP government under the able leadership of President Akufo-Addo to the delight of discerning Ghanaians.