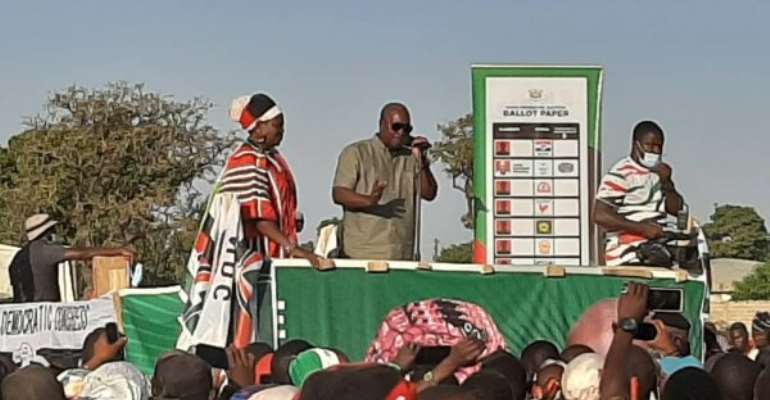 Former President John Dramani Mahama has blamed the New Patriotic Party's government for the delay in the constitution of the Bolgatanga-Bawku-Pulimakom road.

“Look at this Bolgatanga-Bawku-Pulimakom road, I cut the sod for that road when I was President. If the NDC had continued in government that road would have been finished by now. The new government came and asked the contractor to stop work.”

Addressing a mini rally at Widana in the Pusiga District of the Upper East Region as part of his three-day tour of the Region to canvass for votes in the 2020 elections, Mr Mahama said the NPP delayed the contrusction work for over two years.

“I know that is NDC that will come and finish that road to Pulimakom. For us, this election should be a clear choice because everything we have here, from electricity to water, to schools, to health facilities to roads, we got when the NDC was in government,” he said.

Touching on the Agricultural sector, he said in all the farming Districts, the next NDC government would open mechanization centres for farmers in those Districts to register with the centres.

“They will record it on credit. When you harvest and sell your crops, then you come and pay the cost of mechanization and the rest of the money is for you,” the Presidential Candidate explained.

“For most of our young people who are not working, you get ready. For this part of the country, because of climate change, we are going to undergo an aggressive tree growing programme,” adding that the programme would employ most of the youth to plant and nurture the trees till they grow.

Mr Mahama said a lot of youth would be employed in the Forestry Commission under the programme to plant and nurture the trees to grow, “We will pay you every month for the work you will do.”

He said the programme would be a commercial entity as some of the species of trees to be grown would be used for firewood and for charcoal for sale.

He educated them on how to vote in favour of the NDC without spoiling their ballots and introduced the Parliamentary Candidate, Hajia Hawa Ayamba Laadi on the ticket of the Party for the area to the electorate.

He urged them to vote for him as President and for her to represent them in Parliament.