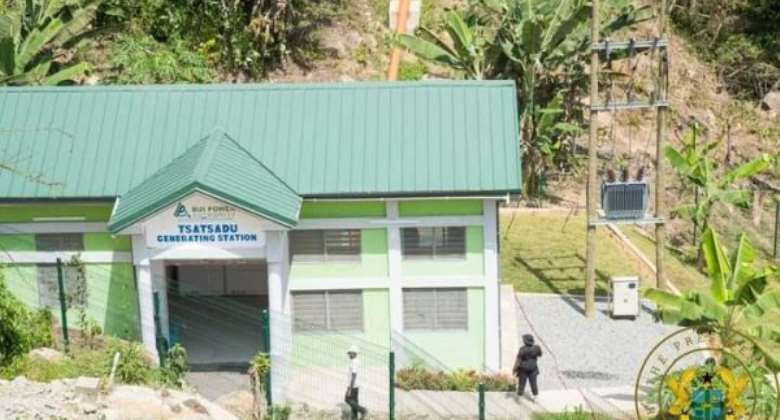 President Akufo-Addo Saturday commissioned the first Ghanaian made mini-hydro power plant at Alavanyo Abehenease in the Hohoe Municipality of the Volta Region.

The facility is to generate 45kW of power, which was initially designed as a 30kW power plant, and situated on the Tsatsadu Waterfalls.

It is a run-of-river scheme and does not require the formation of a reservoir to operate.

President Akufo-Addo, addressing a durbar of chiefs and people of the Alavanyo Traditional Area, said some projects that started under former President John Agyekum Kuffour were abandoned after the Party lost power in 2008.

He said it was worthy to note that Alavanyo had been prioritised among areas earmarked for developmental projects.

The President said a research facility would be sited in the area to enhance research work, while expressing joy at the plant being designed and built by young engineers from the Bui Power Authority.

He said it was good that the area had been peaceful for a long while.

The President urged the people to vote for Mr Peter Amewu to bring more development to the area, adding that work would soon begin on roads in the Municipality.

He said it was good that the building of the plant did not affect the vegetation of the area.

Mr Amewu, the Minister of Energy, said the Bui Power Authority Bill had been laid in Parliament, which would enable the Authority to be responsible for renewable energy nationwide.

He said renewable energy would be generated to provide more stable and affordable energy to citizens to make “Dumsor a thing of the past."

Mr Fred Oware, Chief Executive Officer of Bui Power Authority, noted that a lot of development projects were carried out in the Hohoe Municipality, which was likely to make the area solely dependent on solar power.

Togbega Tsedze Atakora VII, Paramount Chief of Alavanyo Traditional Area, commended Mr Amewu for being the brain behind the project.

He appealed to the government to work on the road infrastructure to enable easy movement of people, goods and services.

The 7,000 seater-capacity edifice, when completed, would have an artificial park, media stand, children's playground and clinic.

The President was accompanied by Mr Aaron Mike Oquaye, Speaker of Parliament, government officials, and national, regional and constituency executives of the New Patriotic Party.