Thousands turn out to oppose French security law despite amendment 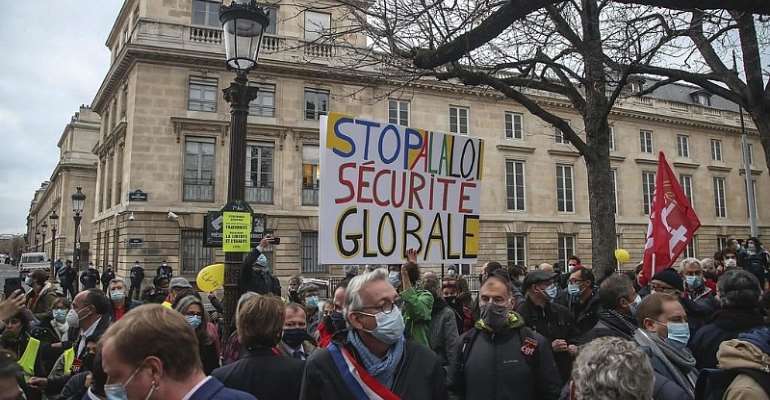 French MPs have voted a controversial law which would ban publication of images of police officers after an amendment was included to protect the right to inform. But nationwide protests on Saturday will still push to get it dropped altogether.

MPs in the national assembly voted Friday evening 146 votes to 24 in favour of the controversial article 24 of the global security bill which would make it illegal to disseminate images of police officers if there is “intent to harm the officer's physical or mental integrity”.

MPs were deeply divided over the article with left and centrist parties in particular concerned it would pose a threat to press freedom. But the article was approved after a sentence was added guaranteeing “the right to inform”.

“The balance is reaffirmed between freedom to inform and protection of police officers”, Interior Minister Gérald Darmanin said during Friday evening's heated debate.

“Will journalists be allowed to film and broadcast without blurring the faces of officers and gendarmes? The answer is yes,” said Darmanin. Ordinary citizens would also be able to do so, he added.

While “no police officer” will be able to prevent a citizen from filming a police operation, the interior minister made it clear that “publishing an officer's face” and “commenting with intent to harm” could constitute an offence, punishable by a one year prison sentence and €45,000 fine.

The attempt to clamp down on such filming prompted street protests on Tuesday across France and again on Saturday afternoon. In many cases, reporters were joined by groups supporting the Yellow Vest movement.

The government argues that restrictions on images of police officers are necessary to protect both officers and their families from being targeted in online campaigns.

But critics say video footage - some of which was shot by passers-by and published on social media before the mainstream press reported on it - has allowed cases of police brutality to come to the fore.

Critics of the bill include global organisations Amnesty International, Reporters Without Borders and the United Nations.

They claim that the notion of "intent" is both vague and hard to prove. It could also be open to abuse from police and, ultimately, lead to reporters being unable to do their job in covering protests and demonstrations.

Voted with reservations
While the article was voted, 12 MPs abstained, some expressed deep reservations.

Ugo Bernalicis, from the hard left France Unbowed party, castigated “an entreprise [aimed at] massively dissuading people from demonstrating and filming what happens during a demo”.

Nicolas Turquois, from the centrist MoDem party which forms part of the government majority, chose to abstain saying he was “ill at ease” with the article.

The bill, which also covers other aspects of security and law enforcement including the controversial use of drones, now goes before the Senate for further debate and must also be validated by the Conseil d'Etat, France's highest administrative court before becoming law.

On Friday, French defender of rights, Claire Hédon, called for the article to be removed altogether.

Police unions Alliance and Unité-SGP-FO meanwhile welcomed what they termed an “important victory” despite “relentless violence of our opponents”.