Be Conscious Of The Environment—Cecilia Abena Dapaah Admonishes 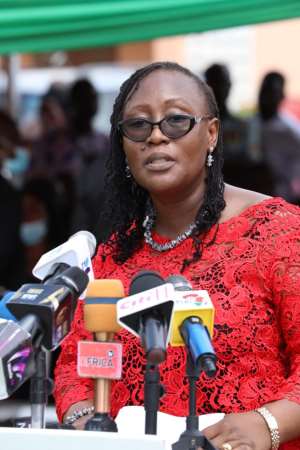 Ghanaians have been urged to be conscious of the environment in order to preserve its natural habitat.

This is the only way to live healthy and productive lives.

The Minister of Sanitation, Cecilia Abena Dapaah, gave the advice in a speech red on her behalf at the Sod-Cutting Ceremony for the construction of the Central Regional Integrated Recycling and Composite Plant in Mankesim.

According to her, the lack of final disposal sites for refuse has become a challenge to the government in achieving a cleaner environment.

She expressed happiness that the project when completed will help solve the sanitation problem in the central region.

The Central Regional Minister, Mr. Kwamena Duncan, observed that the government through the ministry of Sanitation and Water as part of efforts to ensure a clean environment in the region has cleared about four refuse dumps that have existed for over 40 years in the region.

He maintained that the government is convinced that wast is cash, hence, its plans to set up Recycling plants in all 16 regions.

According to him every journey begins with a step,hence, was hopeful that government will fulfill all promise made one after the other.

The NPP Parliamentary Candidate for Mfantseman Constituency, who is also the wife of the late MP, Mrs. Ophilia Mensah Hayford, observed that the project will promote cleanliness, adding that clean communities promote good health, whilst good health also brings wealth and development.

"This is just the beginning because where ever Zoomlion goes there is cleanliness, and the project will create lots of jobs for the youth in the municipality," she stressed.

Mrs. Ophilia Hayford reminded the Constituents that the only way to honour the memory of the late MP was to vote for her to continue with the various ongoing projects of the husband.

"All eyes are on Mfantseman now hence, whenever we make a request in government we get swift response,"she noted.

She called on electorates to come together in peace and unity, and vote to maintain the government for more development considering the numerous fulfilled promised such as,1D1F, school feeding,free SHS 1ambulance per a Constituency and others.

According to the Deputy Director of Zoomlion and Juspong group of Companies, Mrs.Gloria Antwi, the project which is a 400 tonne capacity facility, will be sited on an 100 acre land at Krampah town on the Mankesim Cape Coast road.

She said the project when completed will create about 250 direct jobs for skilled labour, whilst about 1,500 indirect jobs will also be created for the unskilled.

According to her Juspong Group of Companies is of the firm belief that wast is not wast, but a very valuable resource that can be recovered as raw materials to serve other industries.

She said the central region alone generates about 990.000 tonnes of waste hence, the project will Recycle waste and with modern technology to convert it into fertilizer for farm use.

The Municipal Chief Executive, Mr Kenneth Kelly Essuman, earlier in his welcome address, reminded Ghanaians of the president's promise in the 2016 campaign of ensuring a clean Ghana.

According to him this vision by the president was to partner the private sector to set up recycling plants in all 16 regions which was why through the effort of the late MP, Ekow Quansah Hayford, the central regional one is been sited in Mfantseman.