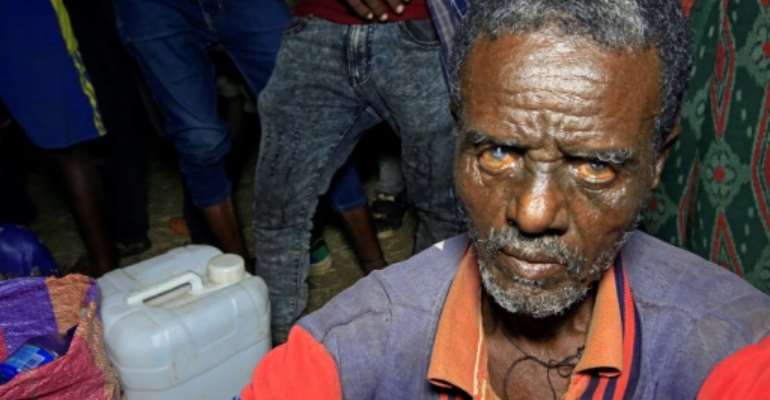 Ethiopian refugees who fled fighting in Tigray province are pictured at the Um Rakuba camp in Sudan's eastern Gedaref province, on November 19, 2020.Sudan -- one of the world's poorest countries, now faced with the massive influx -- has reopened the camp, 80 kilometres (50 miles) from the border. By ASHRAF SHAZLY (AFP)

UN chief Antonio Guterres called Friday for the opening of humanitarian corridors to assist civilians caught in fighting in Ethiopia's Tigray region, noting that authorities had so far rejected attempts at mediation.

"We are very worried about the situation in Ethiopia," the secretary general told reporters in New York, warning of a "dramatic humanitarian impact" including in neighboring Sudan.

"We have been asking for the full respect of international humanitarian law and also for the opening of humanitarian corridors and the truces that might be necessary for humanitarian aid to be delivered in the areas of conflict," he said, without specifying where such corridors could be located.

"This is a matter of enormous concern to us, and I hope that these appeals will be heard," he said. "I hope that this will end soon and that Ethiopia will be able to find the peace it needs for its development and the wellâ€'being of its people."

Ethiopian Prime Minister Abiy Ahmed unleashed a military campaign in the northern Tigray region on November 4 with the declared aim of unseating its ruling party, which he accuses of defying his government and seeking to destabilize it.

Hundreds of people are reported to have been killed and more than 30,000 have crossed the border into Sudan, with the UN planning for up to 200,000 fleeing unrest over the next six months.

Guterres said he had spoken of the crisis with key regional actors including the prime ministers of Ethiopia, Sudan and South Africa.

"Until now, there has not been the acceptance by the Ethiopian authorities of any form of external mediation," he said, when asked why the UN Security Council had yet to meet on the issue.

"We go on entirely at the disposal of the African Union to support any African Union initiative in this regard, and as I said, our main concern now is the dramatic humanitarian impact," Guterres said.

There's no disquiet among us over Akufo-Addo 'luxury' trips,...
31 minutes ago