Spain to set up camps for 7,000 migrants in Canaries 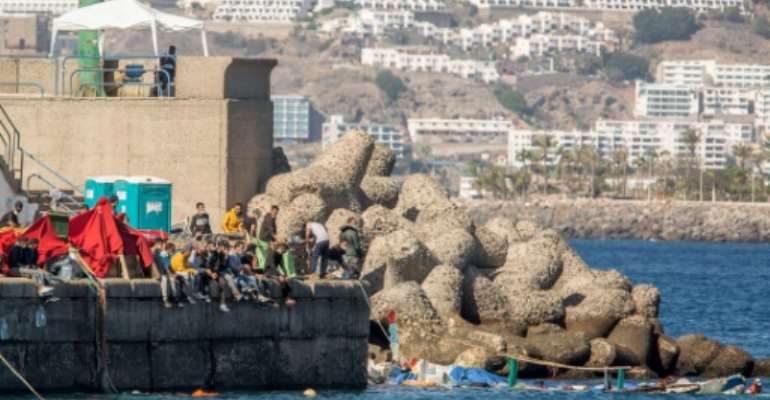 Spain will set up emergency camps for up to 7,000 migrants as part of a plan to tackle the huge influx of arrivals in the Canary Islands, the government said Friday.

The plan also involves reinforcing Salvamento Maritimo's coastguard rescue teams in the area, alongside a diplomatic offensive as part of a concerted push to address the crisis in the holiday islands where more than 12,000 people have landed since September.

Migration Minister Jose Luis Escriva unveiled the details at a news conference in Gran Canaria after talks with regional officials who want urgent government action given the saturation of the islands' migrant services.

Escriva said "tents and emergency encampments with 7,000 places" would be set up within weeks as a temporary solution while the government readied other facilities, mostly military, in a "more stable" setup for processing arrivals.

Satellite map of the Canary Islands and the African coast. By Gillian HANDYSIDE (AFP)

The plan will cost 84 million euros ($98.5 million) which would come from European funds, he said.

The emergency set up would enable the authorities to rehouse the 5,5000 migrants currently staying in tourist accommodation that has almost totally been emptied by the pandemic, along with more than 1,000 others at Gran Canaria's overwhelmed Arguineguin port.

The port camp was initially put up to process arrivals and run virus tests but it has become saturated with more than 2,000 migrants sleeping there although the authorities have since Wednesday been moving hundreds of people into a temporary camp set up by the military near Las Palmas, the capital.

So far this year, more than 18,000 migrants have reached the Canaries, 10 times the number that arrived in 2019. The figures soared after EU agreements with Turkey, Libya and Morocco stemmed the flow along previously popular migrant routes into to Europe.

The Arguineguin port camp was put up to process arrivals and run virus tests but it has become saturated with more than 2,000 migrants sleeping there. By DESIREE MARTIN (AFP)

The crisis has triggered sharp criticism of the patchy response by Spain's left-wing coalition government, with Escriva admitting its response "could have been more proactive".

Standing beside him at the news conference was the islands' regional chief Angel Victor Torres has asked the government to "urgently" transfer migrants to mainland Spain to ease pressure on the archipelago.

"The Canary Islands categorically refuses to be the place that takes in 100 percent of the migrants that reach Spain, he said.

Earlier, Defence Minister Margarita Robles also admitted failings in the government's approach to "the humanitarian crisis" and particularly at the port where conditions were "not suitable for human beings".

On the diplomatic front, Interior Minister Fernando Grande-Marlaska met his Moroccan counterpart Abdelouafi Laftit in Rabat on Friday over ways to halt the influx in countries of origin and ease the "emergency situation" in the Canaries.

"We specified various measures we must take, mainly in the area of combating illegal immigration and fighting criminal organisations" involved in people trafficking, he told reporters.

He also said the coronavirus pandemic was "a major factor influencing the increase of arrivals in the Canary Islands".

It is not the first time the archipelago has seen a surge in arrivals. In 2006, 30,000 migrants managed to reach the Canaries before stepped-up Spanish patrols and repatriation agreements with African countries slowed the influx.