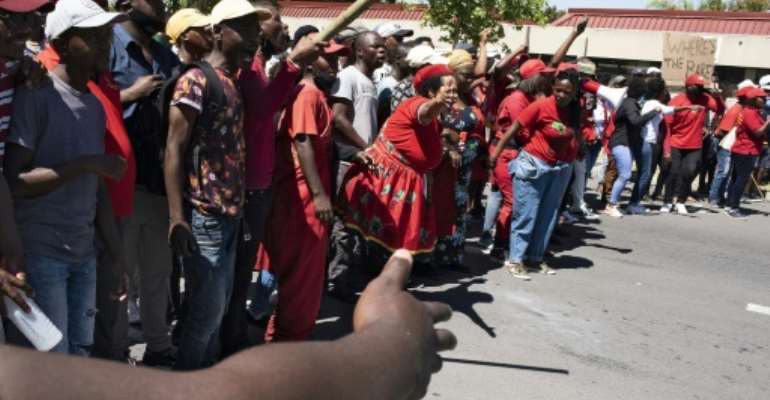 Protesters outside a school in Cape Town where a whites-only party was allegedly organised last month. By RODGER BOSCH (AFP)

The protesters dispersed and later regrouped a few blocks away. Police had erected razor wire fence to keep the protesters from the vicinity of the school.

A white man who walked towards the podium while EEF's secretary general Marshall Dlamini addressed supporters was assaulted by a group of protesters, prompting police to fire another round of teargas.

Police had said only 100 people were allowed to march to the school.

The protests were the latest in a string of demonstrations against alleged racism at Brackenfell High School following the dance party held in late October.

A few days after the party, EFF members tried to march to the school but were blocked by some of the students' parents, resulting in fist fights.

President Cyril Ramaphosa called for an investigation, describing the clashes as "deeply regrettable".

"The spectacle of parents and protesters coming to blows at the school gate is deeply unfortunate," Ramaphosa said, adding the development brought "back hurtful memories of a past we should never seek to return to".

The clashes occurred a few weeks after similarly racially-charged protests in the central farming town of Senekal over the murder of a white farm manager by suspected black assailants.

Despite the end of apartheid a generation ago, racial tensions in South Africa often remain high.

"Apartheid did not end in 1994. They (whites) keep showing us their true colours," the EFF tweeted.

The school has denied responsibility for the year-end dance party, saying it was organised privately and hosted outside its premises.

In a letter to parents last week, school principal Jannie Muller expressed "deep regret" for the pain caused to "especially learners of colour".