Burkina Faso to vote in shadow of jihadist threat 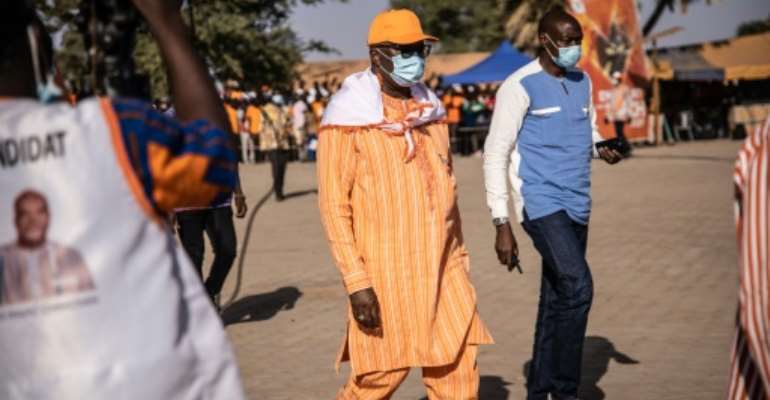 Burkina Faso will vote in a general election Sunday in the shadow of a growing jihadist insurgency, with President Roch Marc Christian Kabore expected to win re-election.

But no votes in the presidential and parliament polls will be cast in one-fifth of the country's territory, where large swathes remain outside the state's control and jihadist attacks strike almost daily.

The violence has forced one million people -- five percent of the 20 million population -- from their homes in the last two years, and at least 1,200 have been killed since 2015.

The security crisis has dominated the campaign and voting will take place under heavy surveillance in the landlocked West African country, one of the world's poorest.

But the opposition did not unite behind a single candidate and Kabore is aiming for a first round victory -- as he won in 2015 -- to stave off a run-off vote.

Eddie Komboigo, standing for the party of former president Blaise Compaore, hails the crowd at a rally in Ouagadougou. By OLYMPIA DE MAISMONT (AFP)

Komboigo told a rally in the capital Ouagadougou Friday that Compaore would "return with all honours", praising his "sacrifice for the development of Burkina Faso".

Despite regularly claiming successes, the poorly equipped and trained army has slumped from loss to loss.

Security expert Mahamoudou Savadogo told AFP that the initial diagnosis of the threat "was poor and the response was neither adequate nor appropriate".

Diabre said that "military action on its own has never been able to defeat terrorism in any part of the world."

"Alongside military action, there must be other actions."

Emmanuel Macron -- president of Burkina Faso's former colonial ruler France, which has troops in the country -- waded into the debate on Friday, ruling out negotiating with jihadist groups in the Sahel.

"We don't talk with terrorists. We fight," he said in an interview.

One of Kabore's efforts has been the creation earlier this year of volunteer militias supervised by the state, called Volunteers for the Defence of the Nation (VDP).

Their role in Sunday's election remains unclear, but a Western source in Ouagadougou said the presidential party "could be accused of using its troops" to push for Kabore votes.

A VDP leader in a central region assured that the militia will remain "neutral".

"We will be there to support the army and protect polling stations," the VDP leader said.

Political scientist Drissa Traore said that because the opposition "did not manage to unite behind a single candidate," Kabore hopes to get more than 50 percent of the vote on Sunday to avoid facing only one of them in a in a second round.

Throughout the campaign, Kabore has promised to restore peace.

"Once the election is over, we will take care of serious matters," he said in a meeting.

Around 6.5 million people will vote in Sunday's election, with enrolment not taking place in nearly 1,500 of the country's 8,000 villages, nor in 22 of more than 300 communes, because of the security risks.