Youth Advised To Take Advantage Of AfCFTA And NEDS

By Adongo A. D. Fatawu 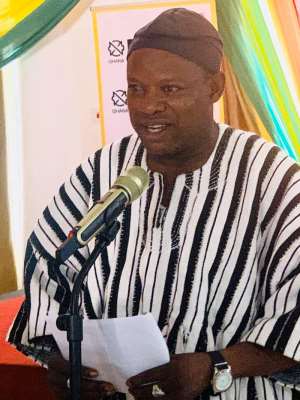 The Northern Regional Minister, Hon. Salifu Saeed has advised the teeming youth of the country to take advantage of the African Continental Free Trade Area (AfCFTA) Agreement and the National Export Development Strategy (NEDS) to grow businesses and develop themselves.

He said this at a “Regional Conference on the Implementation of the African Continental Free Trade Area (AfCFTA) Agreement and the National Export Development Strategy (NEDS),” organised by the Ghana Export Promotion Authority (GEPA) in Collaboration with the Ministry of Trade and Industry on Monday, 16 November 2020 in Tamale, Northern Region.

According to the regional minister, the President has attached importance to Small and Medium Scale enterprises and also, deem it as a driving force with the potential of mobilizing resources towards the total expansion of the economy.

“Government has also taken cognizance of the fact that private sector is an engine for the economic development, hence has created an enabling environment for SMEs to take advantage of the AfCFTA and NEDS to develop their potentials, especially the teeming youth in the country,” he said.

The Regional Minister added that, due to the commitment of H.E Nana Akufo Addo in the implementation of the One District One Factory and others, as well as promoting the effective functioning of the AfCFTA; businesses could position themselves well to benefit immensely from it.

He applauded the participants and the facilitators in particular for choosing Tamale as the centre for the conference and quickly added that this success story has come as a result of the relative peace in the region.

A representative from the Ministry of Trade and Industry, Dr. John Hawkins Asiedu in his keynote address said, the implementation of the AfCFTA will boost Intra-African trade by 52.3% in 2022.

He stressed that AfCFTA is the second largest trade Block in the World with a single market (duty-free and quota-free) and comprises of 55 Member States, with a population of 1.2 billion and a combined GDP of over US$3.4 trillion.

He disclosed that 54 out of 55 Countries with the exception of Eritrea have signed and 33 Countries have ratified the Agreement.

The Deputy CEO of Ghana Export Promotion Authority, Mr. Albert Kasim Diwura, who footed in for the substantive CEO, Dr. Afua Asabea Asare, said the conference was a groundbreaking one, adding that, His Excellency the President of the Republic of Ghana opened the Conference last week and sought to replicate it all over the Country.

‘I didn’t snatch Speaker’s seat; I was only preserving it fo...
16 minutes ago