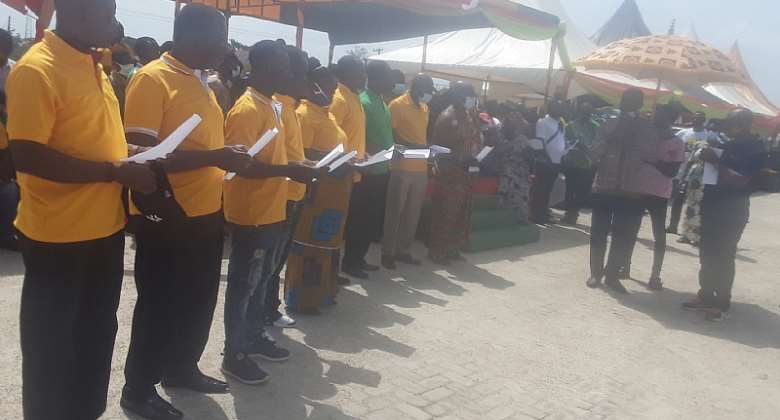 The union which constitutes 156 different registered Cocoa Farmers’ Cooperative Society from various communities in the Dormaa Central Municipality, Dormaa East District, and Berekum West District has become necessary to ensure a sustainable society which can gain a united front to engage government, COCOBOD, and other stakeholders in shaping policy direction of the cocoa industry as well as pull resources of the farmers together where necessary for their own mutual benefit.

Over 9300 farmers with a productive cocoa area of about 8000 hectares which produces 8500 tons of cocoa, clad in various cooperative association regalia converged at the Wamfie new lorry park on Wednesday, November 18, 2020, for the inauguration

Addressing Farmers and other dignitaries at the durbar, the C E O of COCOBOD Hon. Boahen Aidoo gave an update on the ongoing cocoa rehabilitation program in farms identified with the cocoa swollen shoot disease, advising that farmer who has not yet had such experience of the disease should be very vigilant for early detection and treatment to halt its spread.

He explained the importance of pruning and the hand pollination exercise currently underway in their farms to high yield and educated them on how best they can assist the cocoa extension officers in their various areas to judiciously make the most out of the hours of visits they spend on their farm when he touched on the COCOBOD Productive Enhancement Programmes (PEPs) which also include mass spraying and irrigation and others.

He congratulated the farmers for understanding the need to form the cooperative association which will go a long way to assist them gain support services relevant to their cocoa farms and also enable COCODOD to get informed details of the farmers in order to address their concerns adequately.

While taking the farmers through some best farm practices which would enhance quality and maximum harvest, Hon. Aidoo announced the ban on weedicides and advise the farmers to desist from its use to control unwanted growth.

He rather encouraged the use of weeding slashers which have been given to the farmers through their cooperatives as the best means to deal with weeds.

He was quick to add that weedicide has been found with a chemical component such as 24D which is harmful to human health and the environment and can discredit the sale of Ghana’s cocoa on the international market, hence the need for farmers to take note in order to preserve the quality of cocoa from this country.

He also charged the nine-member executives of the union to be selfless and dedicated to the purpose for which they have been put together to attain results.

The chairman to the Dormaa Area Cocoa Farmers’ Cooperative Union, Nana Deamono Asamoah Koko Kumi appealed to traditional authorities to create an enabling environment where land accessibility would not be a barrier for the youth to enter into cocoa farming.

He revealed that the current average age of the cocoa farmer is 55 years and with the impact, the sector makes on the economy of the country, it would be more prudent the youth are encouraged with every form of assistance to enable them to enter the business.

He thanked COCOBOD for the immense support to the cocoa farmers especially in the areas of pruning, hand pollination, and cocoa mass spraying, fertilizer subsidy, and other technologies for cocoa production.

He requested among other things that COCOBOD put mechanisms in place to ensure that the cocoa farmers in the Dormaa Area get to do their own cocoa sealing in their own jurisdiction to afford them the right information to their progress in their work.

The DCE for Dormaa East Hon. Emmanuel Kofi Agyeman enumerated various cocoa roads in the Dormaa Area which are in a deplorable state which when quickly attended to would bring great relief to the farmers and ensure the development of the area.