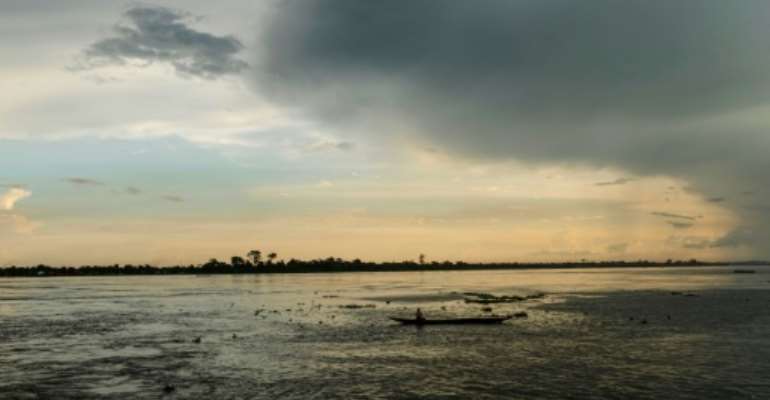 River of spirits: The Ubangui, a tributary of the mighty Congo. By Camille Laffont (AFP)

A sickening stench has wafted of late across a busy road in Bangui that runs alongside the Central African Republic's biggest waterway.

In the reeds growing on the bank of the Ubangui River, fishermen have found grossly mutilated corpses wrapped in sackcloth.

In just one week last month, three bodies -- all handcuffed and beheaded -- were found, humanitarian sources have told AFP. Others have had organs sliced out.

Gruesome discoveries are not uncommon in this poor landlocked state, where violence is part of life's daily backdrop.

But whenever corpses are fished out of the murky Ubangui, the "talimbi" -- crocodile men -- are often the prime suspects.

Some say the talimbi are humans who metamorphose into reptiles. Others believe they are witchcraft practitioners, able to wield powers without ever leaving the river bank.

Either way, the talimbi exercise a decades-long grip on the local mind. The way they are deemed to kill is always the same: they lure their victims below the surface of the river and kill them in punishment for some perceived transgression.

Fear of the talimbi is deeply rooted among residents of Bangui, the CAR capital, including people who have been educated abroad.

People believe that the mutilations found on recovered bodies are clues to the purported offence.

"A tongue is torn out to punish those who talk too much," says a Bangui fisherman.

"If the penis is cut off, the man was an adulterer. The ears are for those who didn't listen."

Anthropologist Aleksandra Cimpric, a specialist in modern African witchcraft, says the superstition is meant to dissuade unacceptable conduct -- it acts "like a regulator of the norms of good behaviour and morality."

The judicial system in the CAR is woefully deficient in a nation long dogged by poverty and corruption.

In contrast, the talimbi are held to have their own tribunals in which people cannot be falsely accused.

"Whoever the talimbi is will verify if what you say is true," says Jean-Claude Beta, chairman of the Association of Tradipractitioners, whose members are traditional healers initiated into the secrets of the spirit world.

To find out, a stick or a plant is thrown into the water. If it floats, the accusation is a lie.

But if it sinks, the talimbi passes sentence and the victim is mystically summoned to the riverside.

"There's no remedy. You are going to die."

No-one, it is believed, falls victim to the talimbi without having first been ritually denounced.

But fear of the crocodile men is so entrenched that it offers an easy solution for murderers, say some.

"It's enough to throw a corpse into the river and the story about the talimbi shields those responsible," says Joseph Bindoumi, chairman of the Centrafrican League of Human Rights and a former public prosecutor.

"Investigations are not carried out with a desire to uncover the truth."

One of the latest victims found in the Ubangui was a young woman.

Her body was never claimed by family or friends.

Her case was closed after young people buried her remains nearby, placing a crooked wooden cross on top as gawking locals looked on.

The police say her body was the only one plucked from the river, not one of three, and bore no signs of violence -- contradicting the accounts by humanitarian sources.

"The corpse was in an advanced state of decomposition," says Inspector Mathurin Koh of the Criminal Brigade, who could not give a precise cause of death as no autopsy had been carried out.

Koh, who authored a study of magical metamorphoses, knows plenty about the talimbi phenomenon, but says "practices of charlatans and sorcery" are partly beyond his official remit, though severely punished by law.

Instead of going to the police, the families of victims prefer to seek out a traditional healer for help in finding out who solicited the talimbi's dreaded power.

Potential witnesses are often too afraid of reprisals to come forward.

Belief in crocodile men persists across central Africa, but it resonates in particular in CAR, where three civil wars have devastated the public education system and undermined traditional authority structures. Most of the former French colony is still controlled by militias.

"When ignorance is spread, it becomes a rule. Those who are against this rule are practically rejected by society," says Joseph Bindoumi, the former prosecutor.

The mutilation found on recovered drowning victims is often the result of prolonged submersion, he says.

"But if you say that it was a crime or an ordinary case of drowning, nobody's going to believe you."