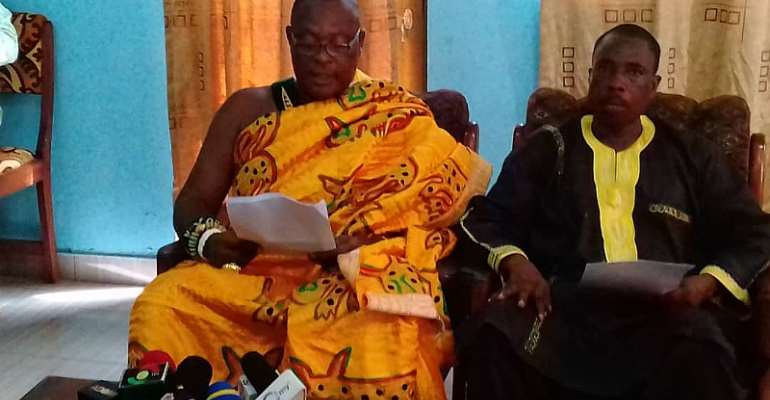 The Ada Traditional Council and residents have thrown their support behind government's initiative of providing jobs and sustainability through salt production.

The government of Ghana has awarded a local-based firm, Electrochem Ghana limited the rights to mine and produce salt at the Songor Salt base in Sege, Ada.

At a short press conference held by the Ada Traditional Council on Thursday, 19th November 2020, the Ada 'Mankralo' Nene Agudey Obichere (III), speaking on behalf of the Paramount Chief, Nene Abram Kabu Akuaku (III), stated that the existence of the Songor Salt Lagoon served as a source of living to the residents.

"The Lagoon gave us the opportunity to do fishing when it was full, and when the operation of the weather caused it to dry, it provided us rich natural salt which we mined in a yearly cycle.

He stated that several appeals to government officials for solutions have proved futile.

"I have made constant appeals to visiting head of state and other government officials honouring my invitation to our yearly Asafotufiami festival to come to our aid to bring back life into salt production which has become the source of economic activity in my traditional area.

"We struck good fortune when in 2017, I enstooled Dr Daniel McKorley of McDan Group of companies as a development Chief of Ada for his constant help for the traditional area. His passion to help Ada led to an agreement reached with the key owners and stakeholders of the Songor Lagoon to put up the request before his Excellence the president to grant a lease to him to revamp, revitalize and optimize salt production in Ada and if possible above the capped 1.4 million metric tonnes capacity," he said.

Nene Agudey Obichere (III) also added that the traditional council and residents are highly appreciative of the President's support.

"I am happy to announce that the government of His Excellency the President, Nana Addo Danquah Akufo Addo accepted my request, worked tirelessly on the processes, and sent three mining lease agreements on the Ada Songor Salt Project through the minerals commission and the ministry of Lands and Natural Resources to parliament for ratification. I am further delighted to say that once again that parliament after going through its due process has ratified these agreements in favour of Electrochem Ghana limited (EGL) associated with our named preferred investor.

"On my behalf, that of the Ada Traditional Council, the priests, and priestesses, the sub-chiefs of the town's and villages, elders, youth and people of Ada. I want to express our profound gratitude and appreciation to His Excellency the President, Nana Akufo-Addo for this kind gesture.

"I wish to also thank the parliament for ratifying the leases. I am looking forward to a swift take-off of EGL in salt production in Ada to hit its maximum production capacity in the shortest possible time. My expectation is that, if the exploitations by EGL yields the expected dividends in Ada, the current generation and those to come would remember the kindness of the president towards the people of Ada," he stressed.

On his part, the Site Production Coordinator for Electrochem Ghana limited, Mr Michael Mantey, stated that his outfit and the entire group are well poised to deliver after the successful agreements with the traditional rulers.

"We have a fifteen (15) years mining lease agreements from the government but we initially have to contact the traditional leaders, opinion leaders to make sure there wouldn't be trouble and that we did some month back, we went back to parliament for ratification and it has been ratified, so we are on-site to work.

"If you look around, you could see the machinery, there was not a single one in place and they are bringing in more equipment. We are moving the tonnage from 60,000 metric tonnes a year to 1.2 million a year or two, that is our target," the coordinator disclosed.

According to the deal between the traditional council and EGL, the EGL has already instructed its engineers to demarcate and set aside specific areas for local mining in consultation with stakeholders. EGL undertakes large pans in those areas which upon mining would be sold by the people at prevailing prices back to EGL.

The traditional authorities of Ada will have representatives on the board to oversee the day to day administration of the company.

The EGL also intends to honour its part of its CRS towards the Ada state in many respect. These include scholarships for brilliant but needy students for tertiary education, an astroturf football field to groom football talents and physical structures for education and health facilities.

The chiefs and the ten (10) clans would also get a modern palace complex with offices and conference rooms.