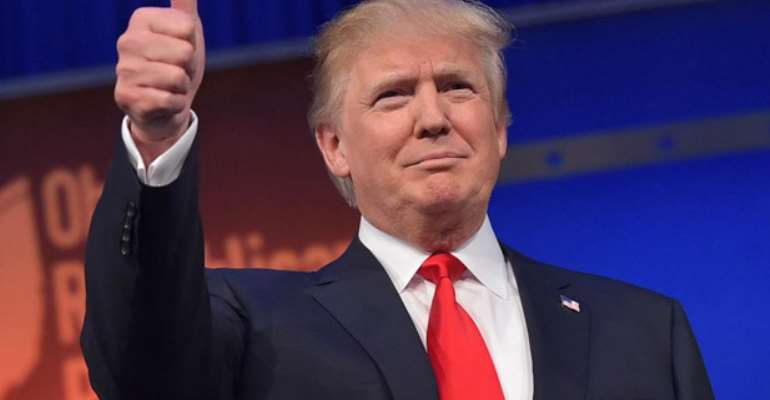 "Your rally yesterday was great! Giant crowd, positive energy, and enthusiasm! This should be the beginning of a new revolution against corruption and fraud in the presidential election! Rallies and giant crowds are important! You are strong President Trump! Most people love you and support you.

Looking at the giant crowds, parades and rallies that were supporting you all over the country, I've seen positive energy, love and support that I've never seen before! I've never seen an American President that is so popular both in the US and around the world! You are not just a president but a real leader! Keep fighting, President Trump! We are all behind you! Make America Great Again! I trust that you will win!"

Yemi has echoed my sentiments and he has spoken very well. I too believe that President Donald J. Trump will be back in the White House regardless of what we see and hear. This is because I have faith in God's word and promise and I believe in the ultimate triumph of good over evil and of light over darkness.

Yet it really does not matter which way the American Presidential election finally goes, what the Supreme Court will say when the matter is argued before them and who will be sworn in as President on January 20th, 2021.

Whether Joe Biden or Donald Trump eventually becomes the 46th President of the United States of America the following facts and assertions are still relevant and need to be explored and considered.

Most Biden supporters in Nigeria are not capable of reading more then three lines on any given day or any given topic but I would urge them to try and read this rather long contribution to the end and learn a thing or two about their preferred candidate and themselves. For the purpose of clarity I have broken the essay into three parts. This is part 1. Relax, fasten your seatbelts, fly with me and enjoy the ride!

Permit me to begin with a qoute that reflects the mindset of a typical Biden supporter. An anonymous commentator on the Suzan Ade-Coker-led Facebook Group known as Rant HG asked the following questions:

"Nigerians living in Nigeria who are Trump supporters, please give me one logical reason why you want Trump to win, asides from what your pastor told you (that Trump is saving Christianity and Biden is an Antichrist). It's the stupidest thing I've ever heard! What has Trump done to influence your continent asides being a proud racist? Why do you want Trump in?

Millions of Americans both black, white and brown don't even want him in. But some misguided Pastors were organising rallies for him: is there something I'm missing? What manner of clownery is this?"

Shallow thinking indeed and the questions are as asinine as they are foolish. If only this pitiful soul had done his research and cultivated the presence of mind to know that there is far more to Trump than he is suggesting and that he did plenty for us in Nigeria he would be a much happier person and a more grounded intellectual.

They say that nine times out of ten the people that try to harm and destroy you are those that you helped in the past and that you gave succour and support to in their time of crisis and need.

Sadly this is a fact and nothing confirms it more than the way in which many Nigerians are now insulting President Donald J. Trump given what he has done for them in the past and the way he confronted President Muhammadu Buhari during a state visit at the White House and told him that the state-sponsored killings and targetting of our civilian population by Government forces, Islamist militias and terrorist organisations had to stop.

After that episode Trump's support base in Nigeria surged and, according to a survey which I read in the Guardian Newspaper, no less than 50% of the Nigerian people became hard-line Trumpians and ardent supporters of the American President.

Millions of Nigerians rooted and prayed for him during the November 3rd American presidential election and this was primarily because he stood up for our people and called Buhari out about the killing and persecution of Christians in our country.

Permit me to remind you about his timely intervention.

On May 1st 2018 he said the following words to Buhari in the prescence of the White House Press Corps with the whole world watching. He said,

"We have had very serious problems with Christians who are being murdered in Nigeria. We are going to be working on that problem very very hard because we cannot allow that to happen".

If there was ever an indirect threat and poignant warning from any world leader about the atrocities that the Christian community were being subjected to in our country, that was it. But it did not stop there.

Last September Buhari himself revealed to the Nigerian people that during his visit to Trump in May 2018 the American President put the following question to him privately. He said he asked, "Why are you killing Christians in your country?".

Nigerian Christians particularly appreciated these interventions from the most powerful man in the world and it certainly made a difference. As a matter of fact it helped to save many lives and Buhari was badly shaken.

Now that the American election has been conducted many Nigerians have had much to say and some have forgotten the efforts that Trump made in the past to save them from the bondage and tyranny that the Buhari presidency represents and the mass murder, ethnic cleansing, religious cleansing and genocide that our people have been subjected to over the last 5 years.

Though the result of the election is yet to be formally announced and despite the fact that many are of the view that, due to the allegations of rigging, Trump is going to remain in office and eventually be declared the winner, the supporters of Joe Biden and Kamalla Harris in Nigeria have done nothing but subject those of us that support Trump to insults, ridicule, curses, abuse, psychological trauma and literary terrorism ever since November 3rd simply because CNN, NBC, BBC, Fox News, Al Jazeera and virtually all the other mainstream media houses and international television networks have thrown caution to the wind and erroneously declared their prefered candidate as the winner.

They forget that 73 million Americans voted for Trump, which is the highest number of votes that any sitting President has ever received in American history and they overlook the fact that the results of the election have not been officially declared or formally certified by the relevant authorities.

More importantly they forget that Trump has refused to conceed for good reason and that he has gone to court to dispute some of the results in a few of the crucial swing States.

Lost on them are the incontrovertible assertions of Conservative voices like the beautiful and brilliant Mrs. Candace Owens who wrote,

"The Democrats rigged a United States election in the middle of the night by dumping mail-in ballots. There would be no other reason to block audits of those ballots to confirm their legitimacy. The media and big tech is suppressing this truth from the world".

Instead of accepting reality and considering the weight and veracity of Candace's assertion the Nigerians, who are used to and have been accepting terribly rigged elections since they were born say things like "just move on and accept the RESULTS!"

Worse still despite the fact that the matter is far from over, the boastful and arrogant claims of victory and the gratuitous insults from the Biden cheerleaders in Nigeria continue to flow all over the traditional and social media wherever and whenever anyone voices support for Trump.

This is especially so where they dare to say that they believe that at the end Trump will prevail and be declared winner.

That is the level of tyranny and fascism with which the Biden/Harris, lunatic/liberal/left tendency has infected the minds and hearts of their ignorant and excitable supporters in Nigeria. They are like the Roman mob in Shakespeare's Julius Caesar: easily manipulated and as thick as two short planks.

Permit me to share just one example of their inglorious and shallow rhetoric and pernicious and specious nonsense right here. One of them, by the name of Mr. Kenny Adenugba, posted the following in a popular whatssap forum. He wrote,

"The matter is deeply burrowed in racial matters, which the evangelical right would mask in righteous fallacy of religious sentiments to hoodwink the unsuspecting.

A number of us aren't deceived by the hues and cries of the respected fathers of American Christian faith who remain as bigoted as any white supremacist could be. Let no one misinterpret the scriptures and come to tell us about Cyrus. It's all scam. Trumpism is the new movement for the fascist, supremacist crowd, and the white evangelical is the missionary unit. May the world be rid of Trumpian culture from this day forward".

Harsh words indeed from Mr. Adenugba. Have you ever heard such arrogant balderdash before?

Thankfully in response to his unadulterated, uncouth and inexplicable drivel, a committed Trumpian by the name of Mr. Sina Kawonise, responded with the following in the same forum. He wrote,

"This is the kind of arrogance and insult one has been suffering from fascist liberals. While those who support Donald Trump concede the right of those opposed to him, we see anti-Trump partisans consistently labeling others as deplorable, hallucinated, immoral, and other negative adjectives. The individual that’s so sure of the correctness of his own partisan position to the point that he would tell-off 73 million Americans as foolish and immoral is actually the one that needs to check his own sanity.

It’s this delusion and hollow feeling of being correct to the exclusion of others that causes strife, which eventually leads to war. I support Donald Trump for several reasons that I’ve made clear on this platform and on others. If I don’t describe you as insane for your choice, why would you suggest that I am for my own choice. What kind of intolerance and violence is this?

As for the Christian who would suggest that fellow Christians who support Donald Trump are less Christian, on what scriptural authority do you stand?

You’re looking at the moral standing of the person, I’m looking at his policies as they affect me as a Christian. You’re right in your focus. But why do you condemn me for my own focus? I leave this Bible passage with the sanctimonious Christian who condemns his brethren as ‘Christian Right’: One person’s faith allows them to eat anything, but another, whose faith is weak, eats only vegetables. Who are you to judge someone else’s servant?"

Mr. Kawonise's response was eloquent, appropriate and comforting. The truth is that the misguided Philistine that he was responding to actually deserved far worse than that. (END OF PART 1)