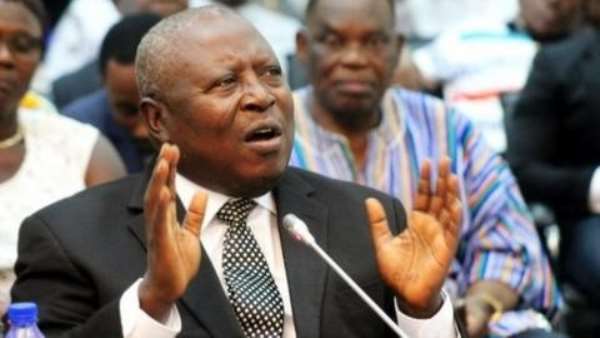 Renowned anti-corruption campaigner, Martin Amidu has resigned as the first Special Prosecutor of Ghana. While this comes as a major blow to the country’s corruption fight, it is not a surprising development to some of us.

I cautioned Ghanaians in the early days to manage their expectations in an article widely published in the media after President Nana Akufo-Addo announced his appointment.

One does not need to be told that per his makeup, Mr Amidu is the type who needs continuous pampering and tending, and I was not surprised that he had a dose of that under the present government that has been battling one corruption scandal after the other since 2017.

It is important to note that the nine-page response of the President to the claims made by Mr Amidu particularly about the needless interference with his work makes it abundantly clear that the Presidency entertained the ego of the man many Ghanaians thought was coming to end corruption. I will not delve into the details of the President’s response except to say that it was carefully crafted to bring finality to the matter, but I doubt it did.

The President’s reaction has rather stoked the fire and as anticipated many questions remain to be answered by both parties and Ghanaians would want to know what Mr Amidu has to say about the counterclaims made by the President. Already, he has been mischaracterised by President Nana Akufo-Addo as an all-talk-no-action anti-corruption campaigner after it was disclosed that he underutilised funds allocated to him, among others. It will not help Mr Amidu’s image if he chooses not to react to the President’s letter.

I want to encourage him to react to the President’s counterclaims. This is a civil and political duty that he owes the taxpayers whose monies fund the Office of the Special Prosecutor.

However, if there is anything that this drama has taught Ghanaian it is that Martin Amidu is not special after all for the role of Special Prosecutor. If he were, he would have tried to make a mark despite the so-called political interference, however fierce it is.

Mr Amidu had everything that mattered to succeed – the trust of Civil Society Organisations (CSOs), support of relevant media organisations, and the cooperation of the government.

But he simply failed.

Perhaps, Mr Amidu’s downfall was that he oversimplified the corruption fight in the country. He thought the people he will investigate will easily give in without putting up a fight as is sometimes the case in love movies.

Fighting corruption in a country where the practice is so endemic, and the practice is sometimes done with the subtle support of the Office of the President such as Ghana is akin to watching a war movie where you should expect that the villain will naturally put up a fight before surrendering.

Despite the obvious, the deposed boss of the Public Procurement Authority, Agyenim-Boateng did everything humanly possible and within his rights to fight off the corruption allegations made against him. Mr Amidu should have anticipated a similar development when he volunteered to examine the controversial Agyapa Royalties deal involving the Finance Minister, Ken Ofori-Attah. But he didn’t and he is blaming threats and interference for his failings and underperformance.

By his resignation, Mr. Amidu has failed himself, his family, and all the people who trusted and supported him. I think we can agree to move on regardless. We can’t afford to lose this corruption fight in Ghana.

The author, A. Kwabena Brakopowers is a Development Communications practitioner, freelance journalist, and essayist whose works focus on politics, migration, international relations, and development. He could be reached at [email protected] .