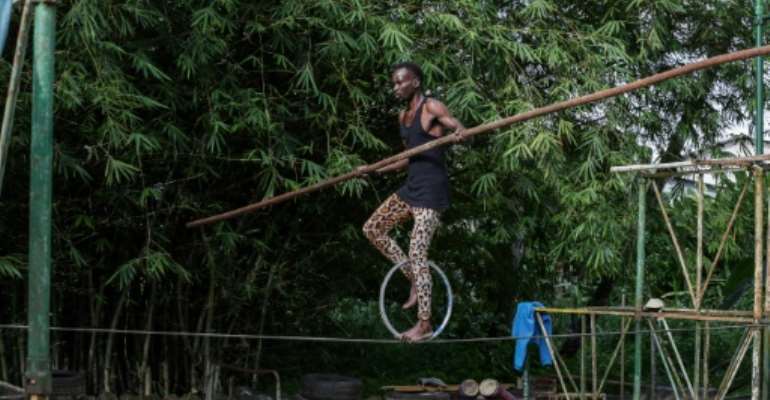 A tightrope-walker with "Le Cirque de l'Equateur", Gabon's only circus, which has fallen on hard times. By Steeve Jordan (AFP)

Wiltrid Mabiala climbs to the top of a human pyramid -- backwards -- with the lithe agility of a cat. Six metres (20 feet) below, a thin mat offers little protection if he puts a foot wrong.

The leopard print-clad acrobat is a performer with Le Cirque de l'Equateur, which once represented Gabon at the world's biggest circus festivals, but now cannot afford even basic safety equipment.

The mats are falling apart, the safety ropes have snapped and the acrobatic nets are long gone. The small central African country's only circus troupe -- and its only circus school -- is facing ruin.

The oldest member of the troupe, Seraphin Abessolo, has spent nearly 30 of his 49 years with the circus.

"The circus is all about stage equipment -- trampolines, juggling gear, diabolos. All of that is gone. Even though we have specialists in all those areas," he says with a sigh.

Since the beginning of the coronavirus pandemic, "nobody calls us, it's been almost nine months since we last performed".

But the circus was struggling even before the pandemic hit.

'You must control the fear'

The acrobats perform risky feats, but the circus can no longer afford safety equipment. By Steeve Jordan (AFP)

"In the past we had more than 20 bookings a year," the association's president Maik Mpoungou said.

"The problems started in 2005. We had fewer and fewer contracts, circuses asked for new acts which are more difficult to implement, and our resources dwindled."

It could no long keep up with the demands of a modern circus, which have themselves recently struggled across the world due to animal welfare concerns, rising touring costs and now the pandemic.

The circus still has its home in Libreville on land that late president Omar Bongo Ondimba gave to the Saint Andre church, where the missionary and Le Cirque de l'Equateur's founder Jean-Yves Thegner had worked. Thegner died from Covid-19 in March.

In the small green space in the heart of the capital, the sound of birds singing rings through the mango and banana trees.

Children run, jump, dance and do acrobatics on old tyres. In the shade of a faded umbrella, older people play chess, casting occasional distracted looks at the leaping kids.

Free of charge, the circus school trains 19 "student artists" aged from eight to 14, most coming from the local neighbourhood.

The circus school trains 19 "student artists" aged from eight to 14, most coming from the local neighbourhood. By Steeve Jordan (AFP)

"You must control the fear," he tells a student who missed a landing.

"What drew me here is doing acrobatics," says 12-year-old Brice, in his third year at the school.

"We also want to travel and join the professional troupe," chips in fellow student Emmanuel.

The grounds still bounce to the rhythm of the acrobatics.

The walls are cracked and crumbling in the makeshift quarters where a dozen members of the troupe live. By Steeve Jordan (AFP)

But according to the older members, the site is a shadow of its former self.

"It was once like a small village," recalls Abessolo.

"There was a small stone tunnel at the entrance and when you came out of it, you were amazed," he said. The tunnel has since caved in.

The walls are cracked and crumbling in the makeshift quarters where a dozen members of the troupe live. During the rainy season, water drips through the roof.

The circus is now pleading for help from sponsors and the authorities.

"We wrote to the minister and even the president of the Republic Ali Bongo Ondimba, but nothing worked," Mpoungou says.

The circus is now pleading for help from sponsors and the authorities. By Steeve Jordan (AFP)

"The objective of the school is to take unemployed young people and offer them training so they can become seasoned artists, so they can have contracts, travel and live from their art."

Some students become discouraged and quit, but others like Mathieu Bikoubilou, a 28-year-old acrobat who has been with the troupe for five years, refuse to give up hope.

"Today I have to do small jobs to survive. But our shared dream is to represent Gabon internationally," he says.

"So I hang on, I work and I tell myself that at the end of all these difficulties, happiness is waiting for us."