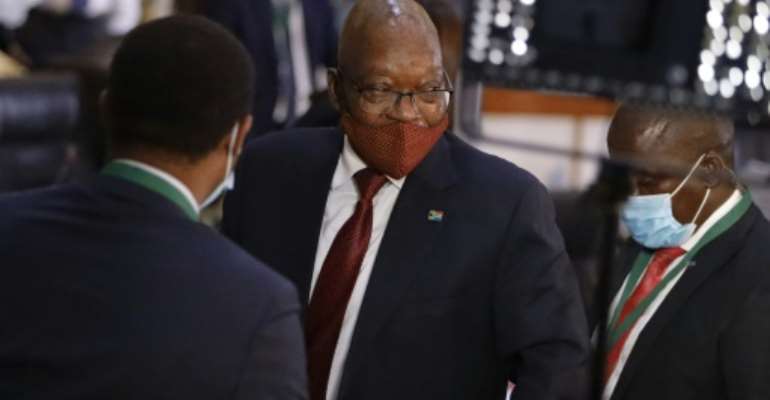 Jacob Zuma, centre, is suspected of having enabled the widespread looting of state assets during his 2009-18 presidency. By Guillem Sartorio (AFP)

The head of a South African panel investigating rampant state corruption under Jacob Zuma shot down Thursday a bid by the former president to have him step aside.

Zuma, seeking what he called an "impartial" judge, had accused Judge Raymond Zondo of bias and demanded he recuse himself.

But Zondo tossed out the application, saying it "failed to meet the test for a reasonable apprehension of bias."

"The application for my recusal falls... and it is accordingly dismissed," ruled Zondo, who is also deputy chief justice of South Africa's Constitutional Court.

Zuma's lawyer Muzi Sikhakhane fought back, telling Zondo "you have become a judge in a dispute that involves yourself."

Sikhakhane requested proceedings be suspended so that he could review the judgement.

After a short recess, he did not return to the court. He had been expected to face a request to take to the witness stand.

"It is a pity that he has elected to leave without asking for permission," Zondo said. "This is a serious matter."

Zuma is suspected of having enabled the widespread looting of state assets during his 2009-18 presidency. 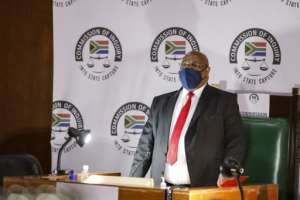 Judge Raymond Zondo, presiding over the judicial inquiry into state corruption, threw out a bid by former president Jacob Zuma to recuse himself. By Guillem Sartorio (AFP)

Lavish government contracts were awarded to an Indian business family, the Guptas, among other scandals.

Zondo, has headed the judicial inquiry commission since it was set up in early 2018, when Zuma was still in office.

But relations between the two men have been frosty over the past year.

At least 34 witnesses have directly or indirectly implicated Zuma, who has denied any wrongdoing.

But the ex-president pulled out after a few days, saying he was being treated as an "accused" rather than as a witness.

Since then he has not testified again, citing health concerns or his preparation for another corruption case related to a 1990s arms deal.

The ruling African National Congress (ANC) forced Zuma to step down in 2018, and his successor Cyril Ramaphosa has vowed to tackle corruption.

The largest opposition Democratic Alliance party slammed Zuma's "spurious" bid as aimed at derailing the work of the commission that has so far cost the South African taxpayer, more than 700 million rand ($45 million).

There is possibility of a lockdown, other restrictions – Opp...
56 minutes ago