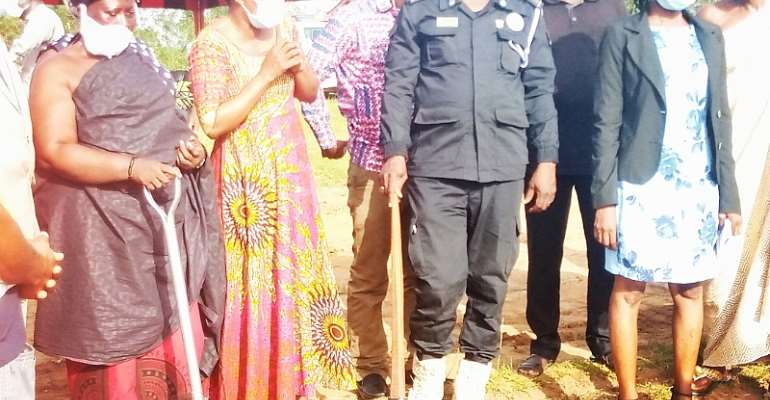 Performing the official ceremony to commence the construction of the Police Station, the Member of Parliament for Obuasi East said the purpose of the project is to improve or strengthen the security of the District which was carved out of the Obuasi Municipal in 2018.

Hon. Boakye-Yiadom said the Government prioritizes the security of its people hence the need to make the Police accessible to the people in the District. He revealed that the Contractor for the project Messrs. Lorkart Switz Ghana Ltd. has been given a 6month period to complete the project and hand it over to the Police Command.

The District Chief Executive for Obuasi East, Honorable Faustina Amissah also said the time has come for the Obuasi East District to get its own Police station and save the people from going to the Obuasi Municipal to report cases.

The DCE called on Nananom to own the project and give the Contractor their maximum support and cooperation to enable him to complete the project within schedule.

Again, DSP Asenso said, the Police Command in the Obuasi Municipality had the enormous responsibility of handling criminal and operational issues coming from the Obuasi East District. He then praised the MP and the District Assembly for coming to their aid.

Nana Danso Abbeam, Regent of Subinso Kwabenakwa also said the Police Station at Kwabenakwa which will serve the entire Obuasi East District will help curb crime in the community and bring about development.

The new Police Office complex will be financed through the DACF/RFG formerly District Development Facility (DDF).

In a related development, the Member of Parliament and the District Chief Executive have cut sod for the construction of a 2- Unit Classroom block (KG) at Domeabra. The project to be constructed by Ahmed Abdallah Enterprise will help improve education in the community.

13 Nigerians who engaged Police in gun battle at Weija reman...
16 minutes ago