“J. J. Rawlings Has Written His Name In Gold” — A Tribute From The People’s Democratic League 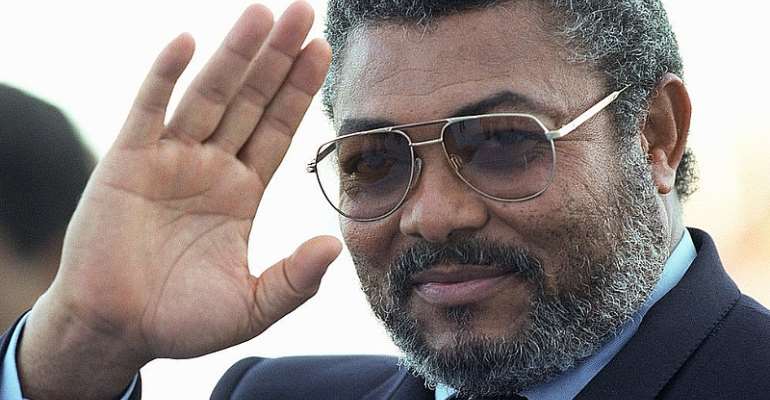 Some men are born great; some have greatness accrued unto them, while others achieved greatness. So goes the wise saying.

These are the best attributes we can ascribe to the late former President of Ghana, all-time Revolutionary, Teacher, Icon and renowned Pan-Africanist, Jerry John Rawlings-alias Junior Jesus. J. J. do your own before you die, Ghanaians told Jerry John Rawlings in 1979. Exactly, the late former Ghanaian leader did catapult Ghana to become the gateway to West Africa. He came, he saw and he conquered.

J. J. Rawlings was a revolutionary, a trail blazer, a true inspiration for all, a prominent voice of reason, a strong Nkrumaist, and instrumental in the formation of the African Union (AU), which replaced the former Organisation of African Unity (OAU). He was a flamboyant champion of peace and human dignity; a global humanitarian leader for his support of disaster relief; anti-apartheid warrior and a staunch advocate and defender of Pan-Africanism. He was known for his tenacity, work ethic and civility. For example, despite his being ideologically anti-imperialist, he was in fact friendly to the United States (Especially the former Clinton Administration in Washington).

J. J. Rawlings legacy includes his work with the Pan-African Movement in defending the rights of blacks on the African continent and the diasporas. His special characters as a revolutionary icon and role-model leader, as well as his commitment and ability to building bridges and fostering friendly and harmonious relationships amongst nations placed him high above others.

He led Ghana with wisdom, patriotism and determination. Under his leadership, Ghana played a key role in global peace efforts, including the peace process in Lebanon, Liberia, Sierra Leone and the horn of Africa. He condemned the invasion of Libya in 2011 and against France manipulative mechanism against ECOWAS agenda for one currency in West Africa and gave refuge to the leadership of the charismatic People’s Democratic League (PDL), in 1990. He supported the struggle for a Palestinian homeland. There is no doubt that successive Ghanaian leaders will continue with this noble tradition.

One of the lessons of Jerry Rawlings life is that one can disagree with others on politics and ideology without being personally disagreeable or odious. In his legacy, there is no iota of doubt that the former Ghanaian leader’s revolutionary ideas, outspokenness, conviction, courage, love for people, works, reflections and foresight in crossing cultural boundaries as peace broker are great achievements, and are widely recognised worldwide. He had made giant strides in the areas of peace and humanism, and these are well-documented for historians to write about.

The leadership-role-model exhibited by J. J. Rawlings was a great example of service to humanity, and his commitment to humanitarian endeavours is an inspiration to mankind. His love for the environment abounds. His balanced, broad-minded, mental viewpoints will be invaluable addition to his unrelenting endeavours. His special love and equal treatment of all races has impacted the lives of blacks around the world today.

Like the Osagyfo Dr. Kwame Nkrumah and others, Ghana’s history would not be complete without the role of J. J. Rawlings. Rather than mourning his death, Ghanaians and Africans generally, should celebrate the fact that in his life, Ghana was saved from abysmal collapse. Africans should preserve the legacy of J. J. Rawlings and continue the fight for national independence, justice, peace and love for humanity.

Rawlings was the emulated leader in Africa during his days, and as a force-of-nature that could not be underestimated, he spoke truth to power, no matter the hoax. Whilst the generosity of his spirit was limitless and he believed that, we must never exhibit the fear to talk to the detractor, we found his ability to mix and have friends across the social spectra – from the rich to the poor, oppressed and oppressor, the good people and mischief makers. To many Ghanaians, he was the “Junior Jesus” of the masses who could navigate a labyrinthine maze of ‘awkward’ relationships with all sorts of persons, who people could never consider he had associations with.

Jerry John Rawlings was born in Accra, on the June 22nd, 1947. He became Head of State, having overthrown the corrupt, inept and reactionary military junta of General Fred Akuffo on 4th June, 1979. Rawlings came to be known in Ghana’s political spot on May 15, 1979 when he led a group of young and patriotic army officers to an unsuccessful attempt to save Ghana from further destruction and devastation from the hands of treacherous military bandwagon. This led to his arrest, detention and death sentence.

Before commuting the death sentence on him, Rawlings friends in the Ghana military led by Junior Officers and the ranks overthrew the then military junta, led by General Akuffo on June 4, 1979. This led to the freeing of Rawlings free from prison, and named him Head of State under the government of the Armed Forces Revolutionary Council (AFRC).

The AFRC conducted general elections on 18 June 1979, with a second round of the presidential election on 9 July 1979. The presidential election resulted in victory for Hilla Limann of the People's National Party, who received 62.0% of the votes in the run-off, to become the elected President and Commander-In-Chief of the Armed Forces of the Republic of Ghana.

Rawlings ran and won in the 1992 elections which the opposition New Patriotic Party (NPP) claimed was a stolen verdict although international observers judged the elections largely free and fair. With the economy still continuing to grow, he won again in 1996. He then took the surprise step of deciding not to run again and supported continued democratic elections, a departure from the strongman politics in much of Africa in those days. With his term-limited, he endorsed his vice president John Atta-Mills for the 2000 election. However, Atta-Mills lost the election and conceded to John Kuofor, Rawlings' 1996 opponent.

Rawlings married his childhood sweetheart Nana Konadu Agyeman-Rawlings and had four children: three girls and a boy. He is the joint recipient of the 1993 World Hunger Award.

We cannot find solace to express the profound grief that has befallen Africa and humanity. J. J. Rawlings was greater than any word in the encyclopedia, and he is more eternal than any word. No word can praise him better than his achievements as a revolutionary icon. No words suffice to console us for the exit of this African genius.