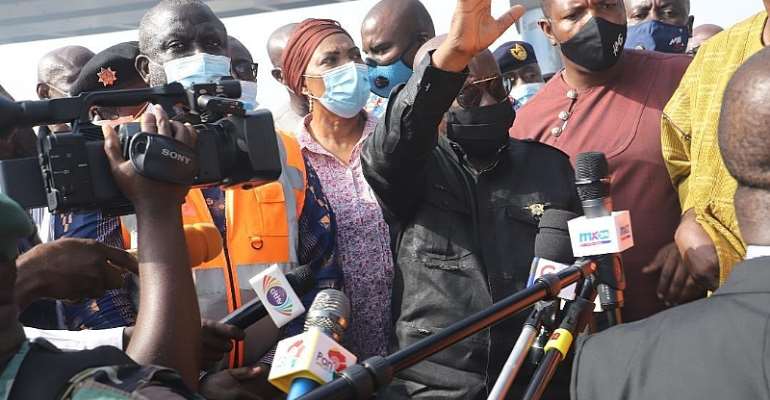 President Akufo-Addo Wednesday took a tour of the Pedestrian Shopping Mall at Odawna, near the Kwame Nkrumah Interchange in Accra, which was razed by fire at dawn.

“This is really sad. It is a big tragedy, “President Akufo-Addo remarked after accessing the damage and the huge loss to shop owners and traders at the Mall.

He said the authorities were in the process of identifying and compiling the details of the victims to inform how government could provide assistance to them to restart their businesses.

“We would see what government could do to begin the process of rehabilitating the people,” he said.

The President disclosed that government had started the process to ensure that all the markets in Accra were rewired to forestall fire outbreaks.

He urged the authorities to keep the people informed about the steps government was taking to alleviate their plight.

Executive Director of the National Board for Small Scale Industries (NBSSI), Kosi Yankey-Ayeh, the told the President that her office had begun the process of providing financial support to the traders and shop owners affected.

She said the Municipal Chief Executive of Klottey Korle, Nii Adjei Tawiah, was providing the data of affected traders who were expected to receive some assistance to commence their businesses by next week.

Hottest Photo Reports
Catch up with all the political quotes from our politicians.
Advertise here
More Headlines
ModernGhana Links
Ameen Sangari Factory will be revived Under 1D1F — Akufo-Addo
Military interventions in two of our member countries ‘backwardness’ – Bagbin to ECOWAS Parliament
I'm sorry, was running away from a prophecy that I'll be shot dead on October 18 – Shatta Wale
Police comb for Shatta Wale after reportedly shot
We Will Not Allow Anyone To Cheat Us In 2024 Elections — Mahama
Assemblies of God supports anti-LGBTQI+ Bill in a memo to Parliament
31.2km Assin Praso Assin Fosu road to be completed in November 2023
Your head should be properly examined if you think we'll sit down to be brutalised, murdered in 2024 elections again – Elvis Afriyie-Ankrah
Cape Coast Airport will be constructed at all cost - Akufo-Addo
TOP STORIES

Ameen Sangari Factory will be revived Under 1D1F — Akufo-Add...
25 minutes ago