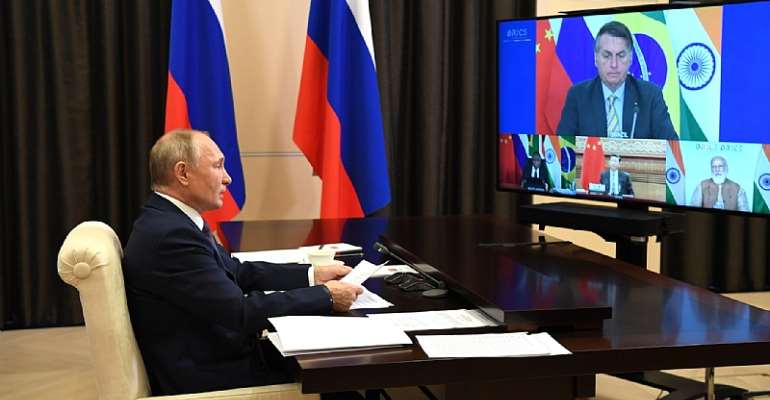 On November 17, under Russia's BRICS Chairmanship, Vladimir Putin hosted the 12th BRICS Summit via videoconference. The leaders of Brazil, India, China and South Africa participated to discuss the state and prospects of cooperation within BRICS, discussed the global stability and security, and most importantly exchanged views on joint efforts to halt the spread of coronavirus pandemic.

President Vladimir Putin reviewed BRICS activities since Russia took over from Brazil, highlighted achievements and set the challenges for the future of BRICS. During the Russia's Chairmanship the BRICS, Russia has held 130 events, including some 25 ministerial meetings, many of them online.

Within the context of the current global health situation, Putin pointed to the subject of medical cooperation among BRICS, and reminded the Ufa Declaration which was adopted five years ago included an agreement to work together to prevent the spread of infectious diseases.

He said that the Russian Direct Investment Fund (RDIF) has signed agreements with Indian and Brazilian partners on clinical tests of the Sputnik V vaccine and with pharmaceutical companies in China and India on the production of this vaccine not only for own use, but also for third countries. There are Russian vaccines, and they are effective and safe. The next task is to launch large-scale production. It is very important to join forces for the large-scale manufacturing of this product for public use.

Besides this, it important to accelerate the establishment of the BRICS Vaccine Research and Development Centre, as agreed at the Johannesburg summit two years ago at the initiative of South African.

Due to the pandemic, many countries have taken emergency measures to support national industries, finance and the social sphere, to revive their economies and return them to a trajectory of sustainable growth. This is the goal of the Strategy for BRICS Economic Partnership for the period until 2025, prepared for this summit.

The New Development Bank is in great demand in the current situation. The Bank has reserved $10 billion to combat the pandemic, while its overall portfolio of investment projects now exceeds $20 billion. As many as 62 large projects are being implemented in the BRICS countries. Incidentally, a regional branch of the bank will soon open in Moscow to implement lending programs across the Eurasian space. The BRICS countries have a special insurance tool in case of a crisis in the financial markets: the BRICS Contingent Reserve Arrangement, with a $100 billion fund.

The BRICS Interbank Cooperation Mechanism is important in the parties' cooperation on credit and investment policy. This year, they have agreed on the rules and principles of responsible financing of development institutions within its framework.

The five countries are enhancing cooperation in science, technology, and innovation. Intensive contacts have been underway between our academic and scientific centers. Their coverage is truly impressive – from ocean and polar research to astronomy and artificial intelligence. Experts from the five countries carry out joint energy research: reports have been prepared on the projected development of the fuel and energy sectors in the BRICS countries until 2040.

"We are witnessing dangerous destabilizing trends in the Middle East and North Africa. The armed conflicts in Libya and Yemen are continuing. There is still a lot to be done to bring about a political settlement in Syria, and the risks of escalation persist in Iraq, Lebanon, Afghanistan, and in the Persian Gulf," he told the gathering.

It is highly satisfying that the BRICS countries have been closely coordinating their efforts on current international and regional matters. A policy document, the BRICS Counter-Terrorism Strategy, drafted for the summit. The BRICS countries are expanding their cooperation on combating drug trafficking and corruption, as well as on international information security.

During the meeting, the leaders of the BRICS member countries heard reports from other speakers who have overseen the work on each track of the association's activity.

Secretary of the Russian Security Council Nikolai Patrushev spoke about cooperation in the coronavirus pandemic response, in combating terrorism and cybercrime.

President of the New Development Bank Marcos Troyjo cited the financial institution's performance data and plans for next year.

President of the Russian Chamber of Commerce and Industry Sergei Katyrin spoke about the Business Council events, while Chairman of VEB RF Igor Shuvalov covered the BRICS Interbank Cooperation Mechanism.

The report by Chair of the Board of Directors of Global Rus Trade Anna Nesterova addressed the establishment of the BRICS Women's Business Alliance.

President of Brazil Jair Bolsonaro, Prime Minister of India Narendra Modi, President of China Xi Jinping and President of South Africa Cyril Ramaphosa, during the meeting, exchanged views on the state and prospects of the five-sided cooperation.

The 12th BRICS Summit Moscow Declaration was adopted which reflects the five countries' consolidated approach to the further development of the association, as well as the Strategy for the BRICS Economic Partnership until 2025 and the BRICS Anti-Terrorism Strategy.

"India, China, South Africa and Brazil commend Russian BRICS Chairmanship in 2020 and express their gratitude to the government and people of Russia for holding the XII BRICS Summit," the adopted document says. Besides that, Brazil, Russia, China and South Africa extended full support to India for its BRICS Chairmanship in 2021 and the holding of the 13th BRICS Summit. *Kester Kenn Klomegah writes frequently about Russia, Africa and BRICS.