Man Arrested With Sacks Of ‘Wee’ At Walewale 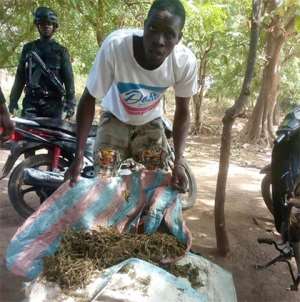 The Walewale Divisional Police Command has arrested one 27-year-old Sumaila Yakubu with sacks of dried leaves suspected to be Indian hemp.

He was arrested in Walewale in the North East region.

According to him, Chief Supt. Samuel Yeboah, the Walewale District Commander led a team of personnel to conduct swoops on some identifiable narcotic drugs peddling 'Ghettos' within the Walewale Municipality.

He indicated that police retrieved dried leaves suspected to be narcotic drugs, two motor bikes and one bicycle during the swoop.

Supt. Dugah said the team went ahead and set fire into all the huts at the 'ghettos'.

He warned residents in the region that the police will deal severely with any person caught in any criminal activity.