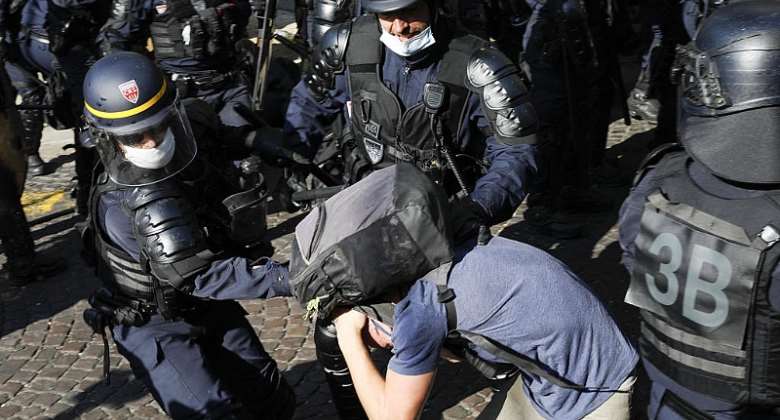 French lawmakers have begun debating the "global security bill", addressing over 1,000 amendments to a national charter. One clause in particular – proposing a ban on publishing footage that identifies police officers, if it is "disseminated to harm" – has prompted accusations from rights groups and journalists that it will impinge on civil liberties.

The French parliament (Assemblée Nationale) will for the next three days examine a bill which covers a broad range of issues concerning how national security is managed.

Within the 1,300 amendments which provide guidelines for local police units, is one that has prompted an angry reaction from the opposition, rights groups, and journalists.

Reservations have also been expressed by members of President Emmanuel Macron's Republic on the Move (LREM) party and its partner Modem.

LREM has put forward Article 24 which would limit the right to broadcast images or films taken of police officers on duty.

For Interior Minister Gérald Darmanin and co-authors of the text Jean-Michel Fauvergue and Alice Thourot, “it's time to protect those who protect others,” referring to what he described as an increase in defiance and violence towards law and order in general.

Dubbed the “Fauvergue law”, after the former riot police chief, it proposes a 45,000-euro fine and a one-year prison sentence for anyone who spreads any “image or other identifying detail of a police officer or gendarme” during an intervention, which could lead to “physical or mental harm” of the officer(s) in question.

Fauvergue considers that the French state “is losing in a battle of images” which began with the rise in accusations of police violence since the Yellow Vests (Gilets Jaunes) protests in 2018.

The government party is supported by the recent parliamentary group known as Agir, which wants to increase protection measures for police officers across the board, including allowing local police to be armed.

“I'm all for expanding the powers of the municipal police forces. They must be armed, after being trained of course, in order to face all kinds of situations,” its president Olivier Becht told AFP.

According to Fauvergue, the measure would not involve “a pixilation of the police officer's face,” nor would it impose any restriction on showing the “RIO” number – an ID badge which each police officer and gendarme is required to wear.

But this was contradicted by Darmanin himself, who earlier assured French police that “if people want to post images on the internet…they must pixelate the faces of police officers.”

Government spokesman Gabriel Attal told the press that this amendment was in no way an attempt to ban the filming of officers during the course of their duties.

But the measure has been harshly criticized by journalists and rights groups who have labelled it “a serious blow” to the freedom of the press, and the rights of individual citizens.

Several trade unions representing journalists have called for a protest in front of the Palais Bourbon in Paris and across different regions of France from Tuesday evening to air their concerns.

“It's not just the freedom of professional journalists which is at stake, but at a wider level, it attacks the freedom to inform others, to express onself and to protest,” argues the CFDT union in a statement.

Hundreds of legal actions have been levelled at French police in recent months, accused of using excessive force during protests and arbitrary detention unfairly targeted at Black and Arab minorities.

In July, three officers were charged with the death of Cédric Chouviat, a man arrested during a routine roadside control. Passersby filmed the heated exchange in which Chouviat can be heard crying “I'm choking” seven times.

The images which went viral on social media resembled those during the arrest several months earlier of George Floyd in the United States, who died after being held to the ground by police officers.

But Stanislas Gaudon, spokesman for the Alliance police union, refutes the idea that Article 24 will infringe on journalists' rights. He says these new measures need to be put in place to protect officers who live with a threat of violence every day. He told France Info that around 20 officers are injured each day in their line of work.

France's human rights defender Claire Hedon however has expressed caution over the security law amendments, warning against any move which would infringe on “press freedom” or “the right to information”.

Amnesty International France has called for a day of action on Tuesday, with a number of speakers set to address the public in Paris on Tuesday.

“If France validates this law, it would be in danger of no longer respecting its international human rights promises,” said Amnesty France president Cécile Coudriou.

Self censorship
She also pointed to other amendments on the table which would pose a serious threat to personal freedoms and right to privacy, one of them being the proposed article 21 which would involve police being able to film citizens with “pedestrian cameras” or drones in public places.

In terms of political reactions to Article 24, the left-wing France Unbowed party (La France Insoumise) has warned that the measure could result in “self-censorship” of the government.

While MP for LREM, Said Ahamada told AFP that he would not vote on this article which “throws unwarranted doubt all police actions“.

As it stands, the conservative Republicans party supports the proposal, as do the members of the far-right National Rally, but only time will tell if the law will be accepted by the Constitutional Council.