By Amaury Hauchard and Armel Baily 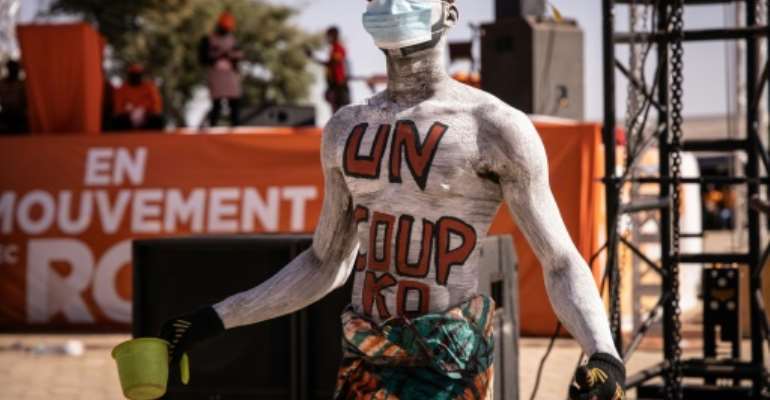 The walls of Burkina Faso's capital Ouagadougou are smothered in posters as more than a dozen rivals try to win over voters ahead of Sunday's general election.

But one colour -- orange -- dominates.

It's the campaign colour of President Roch Marc Christian Kabore, who is running for a second term, defying criticism of his failure to blunt a jihadist insurgency.

Kabore, 63, is the big favourite in Sunday's presidential election.

His supporters are hoping for an outright victory in the first round, obviating the need for a runoff vote.

But in the West African country's most open elections in years, Kabore faces a stiff challenge from Zephirin Diabre, the runner-up in 2015's election, and Eddie Komboigo, standing for the party of former president Blaise Compaore, who was ousted in a popular uprising in 2014.

Presidential elections planned or held in sub-Saharan African in the final months of 2020. By Robin BJALON (AFP)

Burkina Faso's security crisis has dominated the campaign. Kabore has relied on the military to fight the threat, but some are now saying that dialogue with the jihadists should be explored.

Located in the heart of the Sahel, this impoverished country of some 20 million people is in the fifth year of a crisis that has claimed more than 1,200 lives and forced a million people from their homes.

"The priority is peace, that's the first thing that the next president should deal with," Marcelin Sandwidi, a 30-year-old Diabre supporter sporting the candidate's yellow and green on his cap, said at an opposition rally in Ouagadougou on Sunday.

But Kabore's supporters say he has a long-term plan for combatting the jihadists -- and now is not the time to rock the boat.

"Only Roch can respond and win the war," said orange-clad Barry Amadou.

Kabore is focusing on a military solution to the crisis, hoping that a civilian auxiliary militia created last year called the Volunteers for the Defence of the Nation will provide a vital push.

But the poorly equipped and disorganised army is flailing, analysts say.

Kabore's strategy "has not radically changed" over the years, a western diplomatic source told AFP.

Despite frequent claims of success, it depends on France's Barkhane anti-jihad mission in the Sahel, a reliance that is a source of political discomfort for the government.

In the latest attack, 14 soldiers were killed last week in an ambush at Tin Akoff, near the border with Niger.

Most candidates called a 48-hour suspension in their campaign to mourn the dead.

Swathes of Burkina Faso remain outside the state's control.

Voters in nearly 1,500 out of 8,000 villages -- amounting to 17.7 percent of the country's area -- will be unable to cast their ballot in Sunday's presidential and parliamentary elections.

Jihadism expert Mahamoudou Savadogo said that under Kabore there has been a "denial of seeing the reality of the problem."

A soldier in northern Burkina Faso patrols a camp for people displaced by the violence. Five percent of the country's population has fled their home. By OLYMPIA DE MAISMONT (AFP/File)

"Realisation (of the problem) came too late, and the response has been ill-matched and inadequate."

The idea of talking to the jihadists in the Sahel, some linked to al-Qaeda and others to the Islamic State group, entered the political arena in the region several months ago.

Several presidential candidates are in favour of exploring the notion of dialogue, while Kabore is against.

Diabre last Sunday said people "should not close themselves off to the idea".

"Military action alone has never been able to defeat terrorism in any part of the world. There has to be other action, alongside military action."

Low remuneration of bankers could cause some bankers to leak...
29 minutes ago

We'll not allow this old man Akufo-Addo and his old men gov'...
56 minutes ago