Martin Amidu and Daniel Domelevo: Is Corruption Fighting them back? 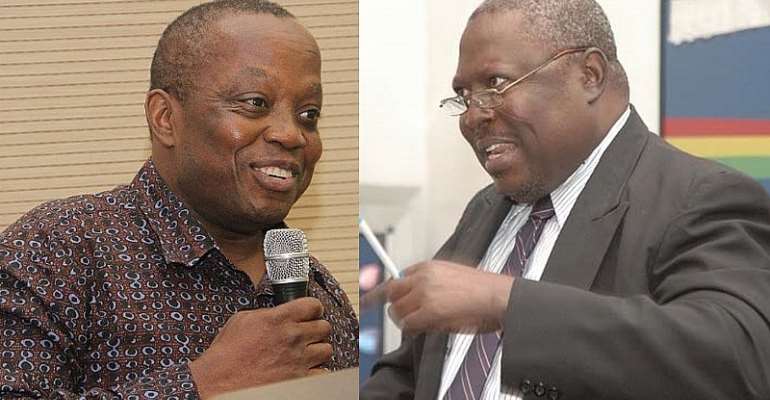 President Obama once advised Ghanaians to focus on building strong institutions and not strong men. Years after Obama’s counsel, it appears Ghana has not heeded to that wise advice because the country thrives on the big man syndrome whereby elites or people in respected positions are feared and revered. The big man syndrome brings interference to bear negatively on state institutions and public officials that need independence to act as ombudsmen of state. The case of the Special Prosecutor (Mr. Martin Alamisi Burns Kaizer Amidu) who resigned yesterday and the fate of the Auditor-General (Mr. Daniel Domelevo) who is currently on leave become another testimony of the big man syndrome.

In fact, the Constitution, 1992 itself can be termed as the supreme blessing for the big man syndrome to thrive because the President is the constitutional authority that appoints every public officer into office. This is clearly stated under article 195 (1) of the Constitution. Article 195 (2) states that the President may delegate his appointing authority to Governing Councils of state institutions. May delegate means the President can choose to delegate or not. The Interpretation Act of Ghana, 2009 (Act 792) defines may as optional and shall as mandatory.

It is problematic that the President is the one clothed with constitutional power to appoint constitutional office holders such as CHRAJ boss, NCCE boss, Electoral Commissioner and their analogous positions like the Special Prosecutor. What if a President of Ghana chooses to be a democratic dictator and therefore dictatorial?

Mr. Domelevo was asked to proceed on his accumulated leave and currently, his fate is unclear. With a lengthy letter that accused the Government of so many wrong doings, the Special Prosecutor, Mr. Martin Amidu resigned from his office yesterday (16th November, 2020), alleging that he was not paid salaries for about two years. This means he was fighting corruption on empty stomach.

Regarding the Agyapa transaction, Mr. Amidu alleged among other things, “I met Your Excellency in your office in the afternoon of 23rd October 2020 and I underscored the fact that my letter dated 16th October 2020 to you was sent out of the necessary courtesy of prior information to your Office as President of the Republic and the Commander-in-Chief responsible for national security. I also underscored the fact that the analysis of the risk of corruption and anti-corruption assessment was conducted professionally, it could not be reviewed by the Minister of Finance or yourself, and my letter was particularly not intended for you to direct me as to how to conduct the duties of my Office. Your Excellency insisted that I should withhold any further action on the report for one week. I reluctantly agreed to your terms but gave you notice immediately that I did not intend to continue as the Special Prosecutor because of your interference in the performance of my functions under the law.”

The foregoing are serious allegations by Mr. Amidu made against the President. Methinks until proven, they will remain mere allegations in the face of the natural justice principle of fair hearing before judgement is passed. At this juncture, one can only fall on the conditional clause in English and say that if Mr. Amidu’s documented allegations are true, then corruption was fighting him back from the presidency for which reason he experienced interference in his duties.

Are Mr. Amidu and Mr. Domelevo the Cause of their Woes?

These two officers were virtually running their offices in the media. With every little occurrence, they ran to the media, seeking for the views of the courts of public opinion on corruption and corruption- related matters. Could they not have used the legal procedures to prosecute their mandates?

The Special Prosecutor for example has be given prosecutorial powers yet he largely paid lip service to his job until his resignation yesterday. The Auditor-General per the Constitution must report to Parliament yet he was reporting more to the media. What I know is that, the media make and unmake personalities. The media act as a two-edged sword thereby lifting a person to fame at one time and making the same person unpopular at another time. Corruption has become a monster in different forms in the Ghanaian society so he who fights the monster must do so tactically and not with a running mouth in the media or from atop the roofs.

I dare say that every corruption fight aims to protect the public purse but the same fight exposes and disgraces the beneficiaries of corruption. Those exposed and disgraced beneficiaries will naturally not be happy with the corruption fighter so they will fight back. In my considered view therefore, Mr. Amidu and Mr. Domelevo have over used the media in the performance of their official duties and this brought them some disaffection. They were not tactical in fighting the monster of corruption because they often disclose their strategies in the media.

Until the Constitution is reviewed to insulate the appointment of public office holders especially those performing ombudsman roles, our institutions will not be strong as President Obama envisaged. If the time tested anti-corruption crusaders like Mr. Domelevo and Mr. Martin Amidu virtually ran away from the corruption fight, then who else can overcome the monster? The woes of the two gentlemen bring to mind the assertion by President Kuffour that corruption is as old as Adam. It means that corruption is an old monster, which is difficult to fight.