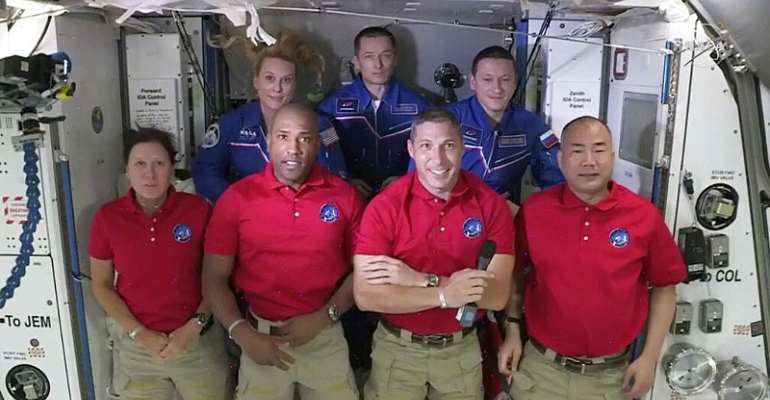 The private SpaceX company has docked with the International Space Station, delivering its crew of four astronauts in first of what the US space agency Nasa hopes will be many trips of its kind. The success comes as the United States waits to see how its space programme will move forward under President-elect Joe Biden.

Three Americans and a Japanese astronaut docked at the ISS on Tuesday aboard SpaceX's Resilience spacecraft after a smooth 27-hour journey.

Nasa hopes transport missions such as this will become routine, ending US reliance on Russian Soyuz rockets.

Glover is the first Black astronaut to make an extended stay at the ISS, while Noguchi is the first non-American to fly to orbit on a private spaceship.

The crew joins two Russians and one American aboard the station and will stay for six months.

US President-elect Joe Biden hailed the launch on Twitter as a "testament to the power of science and what we can accomplish by harnessing our innovation, ingenuity, and determination".

In August, SpaceX completed a demonstration mission showing it could take astronauts to the ISS and bring them back safely, a landmark development allowing the US to begin travelling to the space station under its own power once more.

The Crew Dragon capsule is the first spacecraft to be certified by Nasa since the Space Shuttle nearly 40 years ago.

The vessel, similar in shape to the predecessor of Space Shuttle, and its launch vehicle is a reusable SpaceX Falcon 9 rocket.

At the end of its missions, the Crew Dragon deploys parachutes and then splashes down in water, just as in the Apollo era.

SpaceX, founded by Elon Musk in 2002, is scheduled to launch two more crewed flights for Nasa in 2021, including one in the spring, and four cargo refuelling missions over the next 15 months.

On one of those flights will be France's Thomas Pesquet, who is currently undergoing training at the SpaceX's futuristic facilities.

Nasa will have spent more than $8 billion on the Commercial Crew programme by 2024, with the hope that the private sector can take care of Nasa's needs in "low Earth orbit" so it is freed up to focus on return missions to the Moon and then on to Mars.

So far, Biden has not commented on the timeline of the Artemis programme to return to the Moon in 2024, and Nasa has yet to receive from Congress the tens of billions of dollars needed to finalise it.

Meanwhile, Nasa administrator Jim Bridenstine has announced that he will step down to let the new president set his own goals for space exploration.

He also said SpaceX's success won't mean the US will stop hitching rides with Russia, instead, the goal is to have an "exchange of seats" between American astronauts and Russian cosmonauts.

Bridenstine also explained it was necessary in case either programme was down for a period of time.

However, space ties between the US and Russia -- one of the few bright spots in their bilateral relations -- have frayed in recent years.

Russia has said it will not be a partner in the Artemis programme claiming the Nasa-led mission is too US-centric.