Guinea's Conde says there is no 'witch hunt' against opponents

By Carol VALADE with Philippe SIUBERSKI in Dakar 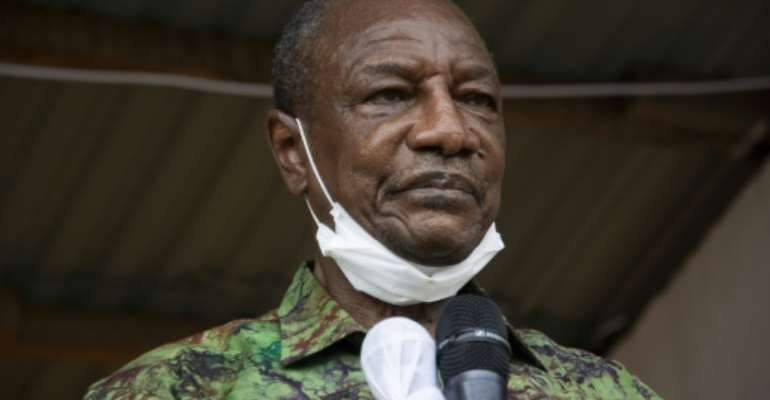 Guinea President Alpha Conde says his third term will be different from the two previous ones. By CAROL VALADE (AFP/File)

In his first interview since his re-election, Guinea's President Alpha Conde dismissed allegations of a "witch hunt" in the country, levelled against him by figures in the opposition.

Conde, 82, was declared the winner of a controversial third presidential term earlier this month.

But violence broke out when his main rival proclaimed himself victorious and alleged voter fraud. Opposition figures were arrested last week over the unrest.

"There is no witch hunt. Nobody is being targeted, except the people who are accused of ordering" violence following the October 18 vote, Conde told AFP and Radio France Internationale (RFI) late Friday.

"Because we have arrested people, it's up to the judiciary to judge," he said in the capital Conakry.

Five opposition activists have been charged with "making threats likely to disrupt security and public order", their lawyers said Monday. 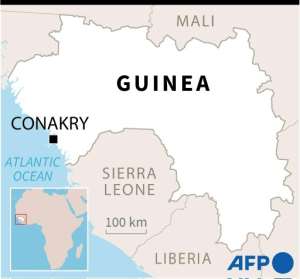 Cellou Balde, a former member of parliament, on Friday turned himself in at the police headquarters where Ousmane Gaoual Diallo, Abdoulaye Bah and Etienne Soropogui were being held since Thursday and Ibrahima Cherif Bah since Wednesday.

Four of them are officials in the leading opposition party, the UFDG, which is headed by Conde's main challenger in the election, 68-year-old Cellou Dalein Diallo.

Diallo, a former prime minister, has criticised the arrests as an "electoral coup d'etat" and accused Conde of attempting to "decapitate" his party.

Even before the vote, the incumbent's announcement that he would stand again triggered months of demonstrations and violence claiming dozens of lives, almost all of them civilians.

While observers from other African countries have backed the official results, France, the European Union and United States have cast doubt.

Conde pushed back against the opposition's accusations that he was to blame for unrest in the country.

"Events don't depend on a single person. For myself, I want to make it known that I have always been against violence. We have an opposition formed by one-time prime ministers who think that one wins by force," Conde said. 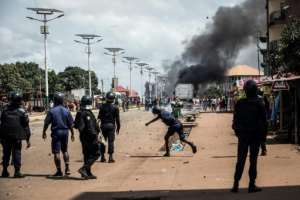 The post-election violence has been deadly. By JOHN WESSELS (AFP/File)

Himself a longstanding foe of successive regimes before he became Guinea's first freely elected president in 2010, Conde has declared that his third term will be different from the two previous ones.

"I believe that I have not succeeded in what I wanted -- that is to say, transformed living conditions for men and women," Conde said, which he blamed on abuses of power within his own administration.

"I shall be pitiless. I will longer tolerate corruption, jobs for the boys or nepotism," he said.

Despite bloody confrontations and an opposition boycott of a constitutional referendum in March, which opened Conde's way to a third term, he stood by the controversial poll.

"If I needed to redo the referendum, I would do it, because what matters is that the people decide," he said.

Alpha Conde declared once again that he wants to put an end to "the mess" in a country that is rich in resources, including minerals, yet where a large majority of the population lives below the poverty threshold.

"It is important that there is no more impunity, whether it's on the side of the political parties or the forces of law and order, because the mess is also police officers who arrest people and hold them to ransom," he added.

Human rights organisations regularly denounce the apparent impunity enjoyed by the defence and security forces in Guinea, which have been accused of an excessive use of force against demonstrators in Conde's past terms.

"Any person who breaks the law, whether he is a minister, a prime minister or a simple citizen, must answer to justice, that's all," Conde said.