Evil Is A Strong Word 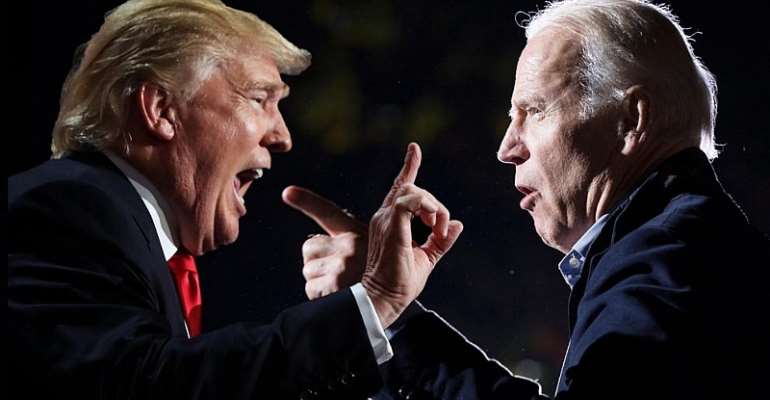 We are still on the conclusion reached in ‘The Hateful Delusional v. The Condescending Jerks’—the one which said that American elections, judging from the extremes of its political divide, always seem to boil down to the phrase, ‘the better of two evils’. I still stand by the statement in that article that a truly independent Ghana and Africa is imperative—that we cannot continue to be but pawns in the ‘game of thrones’ of great nations—America, for one. But we cannot deny this fact, that throughout history, great societies have had enormous impacts on smaller, budding ones—and even similarly, on fellow great nations.

After all, didn’t the American Revolution inspire the French Revolution? Didn’t the French Revolution, with its winning demand of ‘liberté, égalité, fraternité’—liberty, equality, fraternity—spawn similar revolutions, first, in the rest of the West, in America itself, and eventually, worldwide? Funny isn’t it? France learns from USA; USA reciprocates by learning from France.

And as we sit here in Ghana, these three words, for which thousands of peoples, centuries past died, resound in every national move of ours. In the 18th Century these words were not merely words, they were an aspiration. Then an outrageous aspiration, I might add. Societies were built on a lie—that we are born unequal; that one was born king, the other servant; that a poor boy/girl from the remotest of villages could never grow to be president of a nation; that we must grow and die in our respective classes, casts, miseries. These societies sought to overthrow their respective hierarchical regimes; and, as the present will attest, succeeded in so doing—arguably.

Some countries, and states within countries, not only adopted the idea of liberty, equality, fraternity, but also the colours representing these ideologies of the French Revolution—USA, for instance. And I have been meaning to ask the NPP—your red, white, and blue, did you too borrow from the French?

Moving on—didn’t the Abolitionist Movement of Europe, which begrudgingly granted Black people freedom from slavery inspire waves of uproar and uprisings in the Caribbean, in America, and on the African continent itself? These revolutions overthrew varying regimes of oppression—slavery, colonialism, classism, anarchical monarchies, etc.

So, it comes as no shock at all when you and I begin to see some American behaviours, ideologies—some good, others utterly abhorrent—infiltrating our national and continental borders. Recently, these infiltrations (when care is not taken) have regarded the image of leaders—what a president is. Donald Trump set the bar very low—specifically discussed here—in his communications.

And morally, one can argue that a whole lot of American presidents have set the bar very, very low. The only difference between them and Trump has been that they undertook stringent steps to make their follies as discreet as they could. Afterall, didn’t Jefferson, an anti-slavery advocate own hundreds of slaves himself? Didn’t he, a married man in a supposed monogamous society—a society, then and now, very judgemental of polygamous societies worldwide—have relations (forcefully) with Black slaves he held?

This, among others, is why the Trump supporter couldn’t be bothered about his ‘locker-room’ boasting—that he constantly grabbed women by their genitalia. ‘At least he speaks what is on his mind,’ his supporters kept assuring themselves.

America has, for years now, taken the concept of liberalism many steps too far, and advocated for immorality (under the guise of liberalism) in all its many forms (I may not be precisely talking about that first thing that just popped into your mind.). But this liberalism, they have denied to their leaders—"act presidential”, they keep on saying. But aren’t these same Presidents products of their environments? Aren’t they what their society, America, made them?

They kept on saying this: “Trump is un-American!” I beg to differ; Donald is one of the most ‘American’ Presidents to ever sit on the American throne.

If care is not taken, I might deviate from the topic, for the issue of morality (or acting presidential) is very wide and varied. So, let me focus on this issue—communication.

You do not just talk anyhow

In society’s bid at creating and maintaining peaceful coexistence, one thing features prominently as a tool to either aid in this peaceful coexistence or reduce societies into anarchy. And it is this: the way we talk to one another. He knows not to meet her and state the obvious—that she is ugly; reciprocally, she knows not to meet him and state the obvious that his tummy is huge—that he looks pregnant. Humans, in our bid to create a civil society know to filter our thoughts with our mouths. A person who says the first thing that comes to mind is not necessarily honest, but senseless, childish. This expectation of tact in our human interactions is especially so when it comes to our leaders.

One can argue that this is one of the reasons why in our Ghanaian context, the king/queen has an okyeame. Should it happen that the leader, even with their knowledge of the need for tact, and their commitment to uphold a civil society by watching the things that comes out of their mouths, find themselves defaulting, spewing nonsense, the okyeame—acting as filter—may save the day.

A leader who says whatever he likes in private versus one who goes a step further to say those same things in public—here we go again with the ‘better of two evils’ scenario. But then again, when forced to choose (which is unfair for any populace) we are wiser to opt for the former against the latter. We are justified dismissing the former, as having the makings of a bad leader; but the latter, he/she is worse off. This is true—for among other reasons—the moral responsibility a leader owes his/her people and the epistemic responsibility stemming out of this responsibility.

A Moral and Epistemic Responsibility

Because words are not just phonetic sounds, they carry meaning; meanings have implications, these implications mostly carry actions. And every nation, has within it a populace capable of actions; a populace comprising largely youth and active adults, people capable of taking whatever actions—sometimes to their very extremes. Leaders’ words can fuel wars, internal uprisings, disorder, riots, hate, abuse of civil rights, etc.—is all I am saying. And for developing countries like African countries, where majority of people have no real wealth, properties to hold on to dearly, any call to civil unrest can easily generate such huge numbers of participants. Trump and future American Presidents can play fast and loose with certain words; Akufo-Addo and future Presidents of developing Ghana may have to exercise care and desist from those same words.

If care is not taken, in this globalised world of ours, where ideologies spread like wildfire across countries—especially from developed countries into developing ones, a nation as pronounced as USA may find her leaders easily inspiring replications of their faults worldwide.

Evil, perhaps is a strong word to use in this political context—better of two evils—but upon second thought, not so much. Because the consequence these phonetic sounds called words can spawn run deep, and evil in the end may just be reached. When a leader stipulates expressly or worse still, impliedly that he/she will not accept the results of an election, what such leader, if care is not taken, impliedly do is call for a coup. Especially so in a developing country, where democracy is not as entrenched, hence easily uprooted.

If this article does not convince you on the reason why our political leaders ought to watch their mouths, I will try again next week. But I am just hearing news of the great Papa J’s passing—so maybe not.