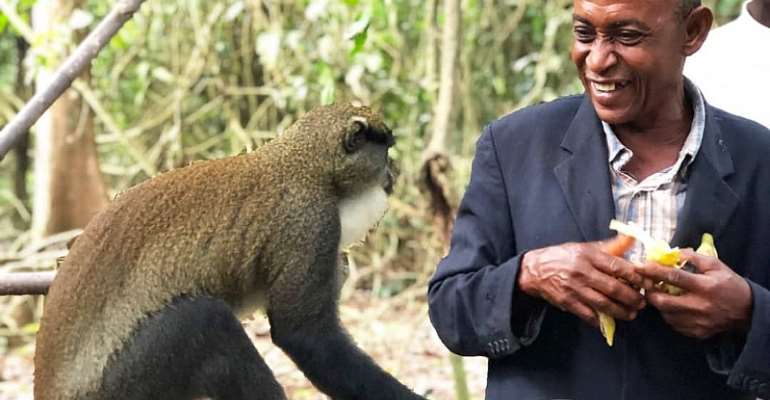 Not long ago, Goka had a monkey sanctuary. It was located near where today's Police Station is located, a short distance after the roundabout.

The sanctuary was very large, the size bigger and populated with monkeys than the ones we see in Fiema and Duasidan, all in the Bono Region of Ghana.

Many a youth and the adult alike frequented this sanctuary, to satisfy their eyes about the many tales told about this special monkeys.

They're friends only to you so far as you throw to them bananas. And they had this dancing they performed to entertain their guests.

They ate every crump thrown to them, and when strangers who seem to have the money to buy for them bananas, these strange monkeys swung to their side and befriended them intimately.

Those crumbs thrown to them by the tourists though did fill their bellies, but it did little to satisfy their craved for food to quench their glutinous hunger.

Then one day, the Good Heavens sent a Lord of high learning to the sanctuary.

Upon his entry, the learned Lord saw how fertile it was the land of the monkeys, one suitable for banana growth, the very staple of the monkeys.

Without even discussing with the caregivers, or otherwise the tour guides, the learned Lord started cultivating banana on the land. The very food which will serve the monkeys all year round, without their dependence on the meagre ones thrown at them by the visitors.

Before leaving the sanctuary, the learned Lord placed his life-size portrait on the farm in order to be recognised for his good work, and be familiarised by the inhabitants, the monkeys, their caregivers and visitors also.

One year passed, and the bananas grew and got ripened, a delight to all eyes, not only the monkeys actually, but even the visitors and the caretakers alike.

Hearing about the news of his good work, the learned Lord retraced his path to the sanctuary, armed with cameras to record how embracing the beasts will be to him, for killing their hunger permanently.

He was wrong in his judgement of the ugly primates.

Though he had his picture, as said earlier, there. But as he stepped foot in the sanctuary, inching towards the bananas, the ingrate swingers in the woods swung to the ripe fruits, barring the reach of the learned Lord to the appetising orchards.

Not even pointing to his portrait on the farm, and gesturing to the animals that he planted the bananas they're enjoying now, he had to ran for his life, fleeing the aggressiveness of these idiots who bites the fingers that feeds them.

Indeed, that learned Lord does not follow the moral absolutes of "turn the other cheek when the first one is slapped".

Seeing it was useless and demeaning fighting these foolish apes, he retreated.

When night fell, and all lives in the sanctuary recoiled to their slumber, the hurt Lord armed himself with a poison that only kill bananas. He applied them gently on the trees. The effects of the toxins was so potent that, when the morning sun fell on the sanctuary, the bananas were rotten and ripped off from their hangings.

To the amazement of onlookers, these ungrateful smelly nose-dripping rotten teeth beasts had gathered under the diminishing trees, in front of the Lord's portrait, and were crying for the lost of the food they'd gone to their sleep previous night eating enough to their full.

Since what goes around comes around, do be careful in paying back they that served you unconditionally.

When travelling on the road, and your horse is not having wings to fly you above, it'll be idiotic to burn the bridges you cross.

The moral lesson in this narrative is not only limited to only relationship between lovers who benefit from others but politicians who use their footsoldiers as cavaliers only when they mount the platform to solicit for votes. And when given the mandate, they close their doors to they that gave them their high paying job (s).

December 7 is nigh in Ghana, be educated by this piece.

For your political stories, poems, biography and drama, contact us._