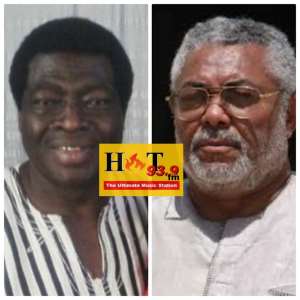 Speaking on Accra-based HOT 93.9FM’s Midday News on Monday, 16th November 2020, Professor Kwame Agyanim-Boateng said, “Rawlings’ input for the development of Ghana is big and that is one way Ghana can keep the name and memory of the late head of state alive”.

He stated that “although Rawlings may have not liked the idea of being named after a school when he was alive, his idea is no more needed because he is dead, so the people he left behind must think on his behalf, and that is how it is made according to history”.

Prof Agyanim-Boateng told the news anchor, Bonohemaa Serwaa Boateng that “when you visit other African countries, they have named roads, roundabout, universities and other infrastructural projects after hardworking passed Presidents but not a Presidents who was only interested in spending citizens’ money”.

Former President Rawlings declined an earlier offer from the Akufo-Addo government for the university to be named after him when the proposal was made in 2017.

Rawlings, who played a significant role in the establishment of UDS in the early ’90s said he did not want the institution to be renamed after him because of his principle not to have any state monument named for him. But Nana Akufo-Addo after the passing of the former president

On Thursday, November 12, 2020 says “such an honour should be accorded to him.” Nana Akufo-Addo at a graduation ceremony at the UDS campus in Tamale on Saturday, November 14, 2020, said it is his strong belief that the university should be named after Rawlings despite his earlier rejection.

Jerry John Rawlings passed away on Thursday, November 12 at age 73-year-old at the intensive care unit of the Korle-Bu Teaching Hospital in Accra. The founder of the opposition National Democratic Congress (NDC) was last seen in public on October 19, during the final funeral rites leading to the burial of his mother, Victoria Agbotui.