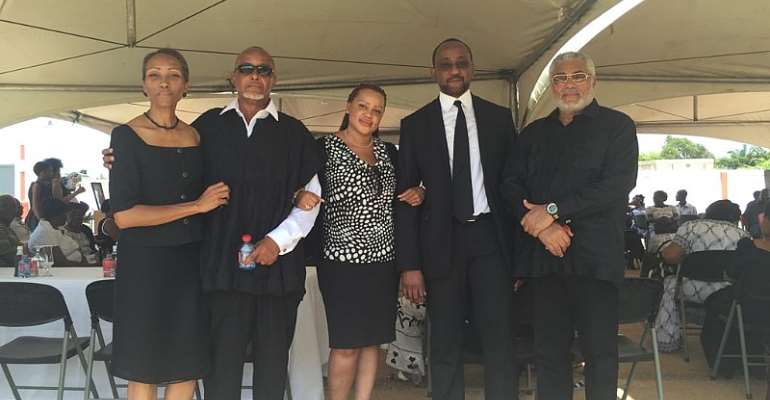 Thanks for sharing, Peter. Unfortunately, because he was not an intellectual, Former President Rawlings, though a highly-intelligent man, was often denigrated by some of Ghana's smug middle-class intellectual-types, despite the fact that his mercurial-leadership-style actually made a huge difference, for our nation, and it's hapless, and oft-ruthlessly-exploited citizenry.

It is so easy to criticise leaders on the continent, Peter, but one needs to point out the fact that although Ghanaians are a civilised people, their crafty-and-disobedient ways, often make our country an especially difficult nation to govern, alas. That is why our leaders invariably have their work cut for them. Pity.

It will interest you to know that Nii Addy, former President Rawlings' elder brother, who predeceased him, and who lived at Adjirigano, opposite the French School, and worked for the Mormon Church, once told my late girlfriend, Akwele Ali, and I, during a visit we paid to him in his East Legon home, that at a certain stage, President Rawlings called his family together, and read them the riot act.

Long story short: they had to make sure that they always kept their noses clean - because any of them who messed up, had to understand clearly that he would not rescue them from their own folly, but that they would suffer the selfsame punishment, which fellow Ghanaians who broke Ghana's laws, faced. That was Jerry Rawlings for you. Never minced his words. Cool.

The softly-spoken Nii Addy proudly told us President Rawlings had never had cause to worry about him. We both knew what a good soul, and honest gentleman, Nii Addy was, and it did not come as a surprise to us, at all, that he had kept his nose clean - just as his dear younger brother wanted. Lovely man.

President Akufo-Addo needs to do same to those sly, greed-filled family members of his, who are busy disgracing him, and ruining his legacy, such as it is, with their sly-and-corrupt ways. If only they were all like the hardworking and no-nonsense Hon. Kwasi Amoako-Atta, the roads and highways minister. Hmmmm, eyeasem, ooooo...

In showing such respect to the memory of President Rawlings, by: declaring a seven-day national mourning period for the former President; ordering Ghana's flag to be flown at half-mast throughout the seven-day mourning period; receiving Rawlings' surviving family members to the Jubilee House; and following that up, by calling at President Rawlings' official residence at the Ridge residential area, in turn, to pay his personal condolences to former President Rawlings' grieve-stricken widow, Naana Konadu Agyemang-Rawlings, his lovely children, and favourites amongst his closest extended family members, President Akufo-Addo has shown the world what a civilised and compassionate leader he is. Great man. Cool.

President Akufo-Addo, it ought to be pointed out, is also one of the most outstanding leaders, our nation has had, thus far, since independence in 1957. In my humble view, he definitely deserves a second term, to enable him to continue his transformative agenda, that is laying a solid foundation, for a prosperous tomorrow, for Ghana's dynamic and ambitious younger generations. Cool.

Finally, and just as a matter of interest, was that photograph of yours, which you took with President Rawlings, shot during your dear Mama's funeral? Let's stay in touch, dear boy. Wish you well, as always. Peace and blessings to you, and to your young family - and do continue staying safe from COVID-19. You are precious to some of us, oooooo, Massa. Cool.