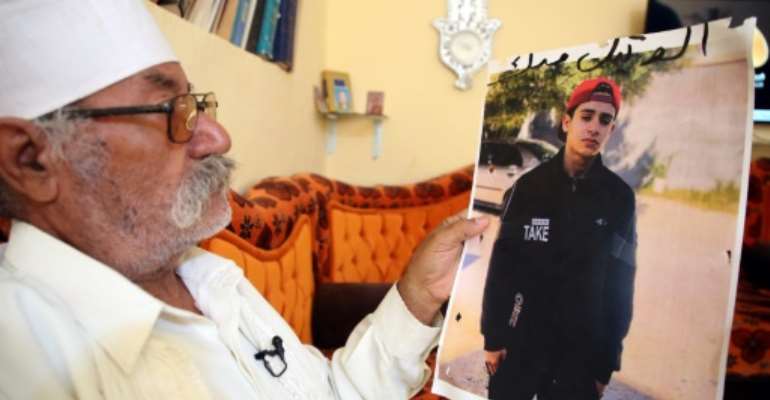 Libyan Mohamed al-Magri holds a picture of his 20-year-old missing son Haitham who he believes was killed and buried in a mass grave in the western city of Tarhuna after armed men took him from his home a year ago. By Mahmud TURKIA (AFP)

A year ago armed men took Mohamed al-Magri's son for questioning as fighting raged around the Libyan capital, and now he fears Haitham was killed and buried in a mass grave.

Magri believes the masked men took his son at gunpoint in revenge, because his family backed the 2011 revolution that ousted Libyan strongman Moamer Kadhafi, and plunged the country into chaos.

Since then rival forces have battled for control of the oil-rich North African nation, split between a UN-recognised Government of National Accord (GNA) based in the capital Tripoli, and eastern forces of the military strongman Khalifa Haftar.

The opposing administrations are backed by multiple armed groups and foreign powers all vying for control -- and Magri's family was caught right in the middle of them.

"He had a passion for birds and knew how to care for them," said Magri, showing a picture of a carefree-looking young man wearing a red baseball cap backwards, his hands stuffed in his pockets.

Haitham, who kept parakeets, was 20 at the end of 2019 when the men took him for questioning, said his father.

"Four vehicles with masked and armed men parked outside our house," he said, staring into his son's photograph. "Men knocked on the door, so I opened."

Magri said the men wanted to "speak" to Haitham and "promised he would return after they finished interrogating him".

"I haven't seen him since then," he said.

Magri said one of the armed men wanted to know about his oldest son Ahmad too.

"I told him he worked as a security agent for a bank" in Tripoli, he said.

That did not go down well with the visitor, who immediately replied: "So he must be pro-GNA", in reference to the Tripoli-based government.

At that time, the GNA was fighting back an offensive that Haftar launched on the capital in April 2019, in which hundreds were killed and tens of thousands were forced from their homes.

Tarhuna, some 65 kilometres (40 miles) southeast of Tripoli, served as the main staging point for Haftar's assault. It is also near Magri's village of Sidi Essid.

In June, Turkish-backed GNA forces repelled Haftar's fighters eastwards, who were supported by Russia and the United Arab Emirates.

Since then, Tarhuna has made headlines around the world after the grim discovery of several mass graves in and around the city, containing bodies of Libyans who had gone missing in the conflict. 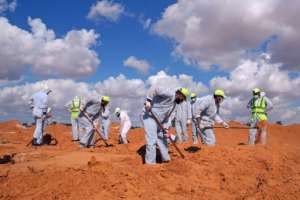 A mass graves in Tarhuna, southeast of the capital Tripoli, where officials say that so far 115 bodies have been unearthed. By Mahmud TURKIA (AFP/File)

At least 115 bodies have been exhumed so far, according to a committee tasked by the GNA to search for missing persons.

The United Nations voiced "horror" after the first mass graves were found in June, and demanded that authorities carry out "transparent investigations into all alleged cases of unlawful deaths".

Back then, an AFP journalist was granted access to a site, where several bodies had been discovered and exhumed for identification by the Libyan Red Crescent.

Scraps of clothing were scattered around the site near graves covered with fresh soil.

"I've searched for him everywhere but there is not a trace of him," he told AFP.

According to Magri, most people he spoke to believe that Haitham was "executed and thrown into one of the mass graves".

"His body has not been found. But if he's in a mass grave, I hope they will find him soon," he added.

Lotfi Tawfiq, who heads the committee tasked by the GNA to search for missing people, said that not all the bodies have been identified, adding that the search to unearth more corpses is ongoing. 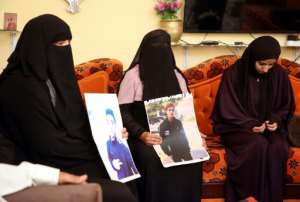 The Magri family want closure after several mass graves were found in Libya following fighting for control of the capital Tripoli. By Mahmud TURKIA (AFP)

Magri believes his son's forced disappearance must have been ordered by a diehard Kadhafi supporter, who he claimed is also behind a series of abductions and murders in the Tarhuna region.

"By targeting my son they wanted me to pay for backing the revolution," said Magri.

"He is young. He did nothing wrong and took part in no fighting," she said.