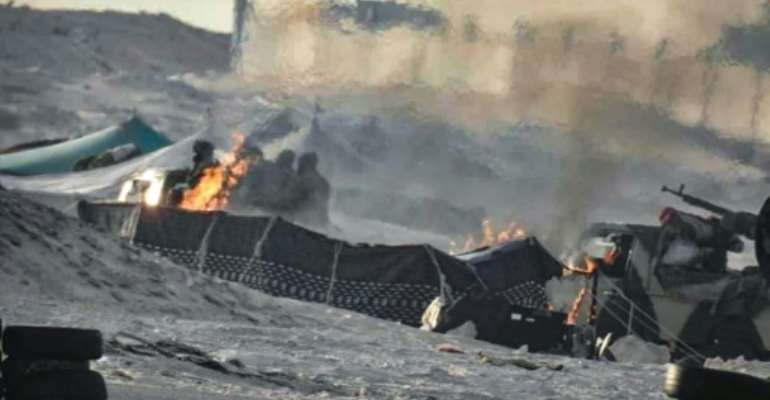 The Moroccan army released pictures is said show tents used by the Polisario Front ablaze near the Mauritanian border. By - (AFP/File)

The Polisario Front said Sunday that it was mobilising "thousands of volunteers" to join its fighters in the disputed Western Sahara, as tensions with Morocco remain high.

Rabat launched a military operation on Friday to reopen a key highway on the border between the territory and Mauritania which it said was blocked by the Polisario Front, which seeks independence for the Western Sahara.

Moroccan and Mauritanian officials said Saturday that cargo traffic had resumed along the road, which is key for trade with the rest of Africa.

In response to the operation, the Polisario declared the end of an almost three-decade UN-supervised ceasefire in Western Sahara.

"Thousands of volunteers who have completed their training are preparing to head to the militarised regions," Mohamed Salem Ould Salek, foreign minister of the Polisario-declared Sahrawi Arab Democratic Republic (SADR), told AFP on Sunday.

"Hundreds of others" are undergoing training, he said, adding that "fighting is escalating" in the far south of the territory, without providing further details.

The claims could not be independently verified.

Rabat controls around three quarters of the Western Sahara, a vast swathe of desert on the Atlantic coast, including its phosphate deposits and its lucrative ocean fisheries. The Polisario controls the remainder.

The Polisario, which proclaimed independence in 1976, demands a referendum on self-determination as set out in the 1991 ceasefire.

The vote has been repeatedly postponed due to disputes between Rabat and the Polisario over voter rolls and the question the ballot would ask.

Without providing any detail, the Polisario has in recent days reported attacks along the 2,700 kilometre (1,700 mile) long wall put in place by Morocco in the 1980s in the Western Sahara to prevent infiltration by Polisario fighters.

The Moroccan military said it had secured the Guerguerat border crossing by installing "a security cordon" along the wall.

Pictures released by the Moroccan army after the operation on Friday showed burning tents that had reportedly been used by the Polisario near the Mauritania border.