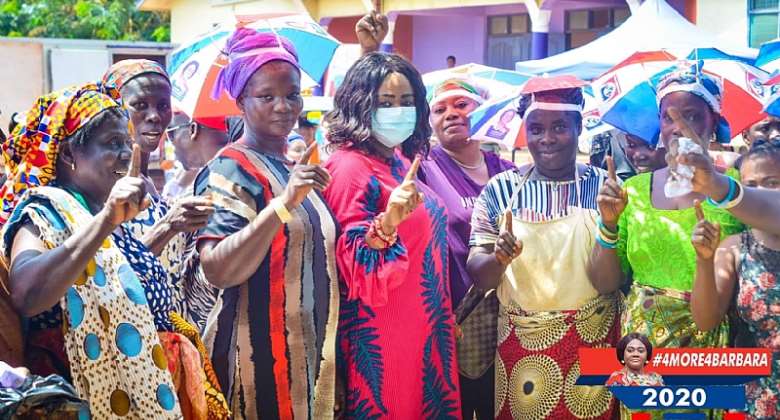 The National Democratic Congress (NDC) fraternity in the Prestea Huni-valley Constituency are said to be living in fear following the robust campaign drive of Hon. Barbara Oteng-Gyasi, the incumbent Member of Parliament (MP) for the area who is seeking to be retained as MP on the ticket of the New Patriotic Party (NPP) in the December 7 polls.

According to some executives of the largest opposition party who spoke on anonymity, the dynamic campaign style of Hon. Barbara Oteng-Gyasi, touting the remarkable achievements of the government of the NPP and appealing to residents to give President Akufo-Addo and her able self four more years to continue with their developmental agenda has fallen on the minds and hearts of the constituents and has been widely accepted by the electorates.

It was revealed that, the community-to-community campaign tour among other activities by the MP has sent distress down the chines of the opposition camp.

They emphasised that the alarming activity by the MP which has caused panic among the rank and file of the NDC which calls for an urgent re-strategy of their campaign was the market campaign drive on Wednesday, November 11, where the legislator interacted with traders and distributed branded NPP aprons and umbrella hats, bringing activities to a standstill at Damang market, as the MP was mobbed by traders upon seeing her, amid yearning four more years for her and Akufo-Addo.

They confirmed that, Hon. Barbara Oteng-Gyasi, has won the hearts of many sympathisers of the NDC due to her outstanding lobbying skills and active representation in parliament, which has created international links and positioned the constituency well to attract infrastructure development and capacity building support from local and foreign sources.

They noted, it is obvious her decision to contest in the upcoming parliamentary elections has received massive endorsement from constituents due to her outstanding first term performance and that has contributed to the distraction of their campaign plans ahead of the December polls.