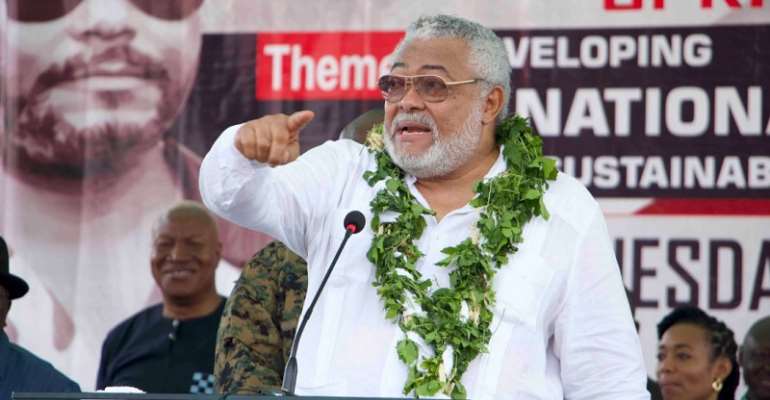 The Volta Regional Chairman of the opposition National Democratic Congress(NDC) Brigadier Henry Kwadwo Ametefe has urged President Akufo Addo to restore the celebration of the June 4 Uprising in memory of the late ex-President J.J Rawlings.

Speaking at the residence of the late ex-President on Friday when he visited to commiserate with the family, Brigadier Henry Kwadwo Ametefe stated that a state burial for Mr Rawlings will not mean much if events such as June 4 and December 31 celebration which were instrumental in institutionalising the fight against corruption is not restored.

“Today we hear that the President is going to sign the book of condolence. He’s so saddened about the death and is going to organize a state burial for him. But there’s something that he[President] must not forget if he does not restore some of his celebrations particularly the June 4 and 31st December, he should forget about state burial. Because what are you going to remember Rawlings for?…that is what he stood for that has led to this country reducing tension among people.”

The then opposition New Patriotic Party(NPP) in 1993-94 tested the legality of the celebration of the 31st December Revolution, NPP v. AG.

The Supreme Court in its verdict agreed with NPP, that the intended celebration of 31st December would glorify coup d’état and could undermine the people’s resolve to resist coup; its celebration was unconstitutional and contrary to the spirit of the 1992 Constitution.

Mr. Rawlings who was the First President under the Fourth Republic passed away Thursday morning at the Korle Bu Teaching Hospital in Accra.

Jerry John Rawlings was born on 22 June 1947 and was a former Ghanaian military leader and subsequent politician who ruled the country from 1981 to 2001 and also for a brief period in 1979.

He led a military junta until 1992, and then served two terms as the democratically elected President of Ghana.

Rawlings initially came to power in Ghana as a flight lieutenant of the Ghana Air Force following a coup d’état in 1979. Prior to that, he led an unsuccessful coup attempt against the ruling military government on 15 May 1979, just five weeks before scheduled democratic elections were due to take place.

After initially handing power over to a civilian government, he took back control of the country on 31 December 1981 as the Chairman of the Provisional National Defence Council (PNDC).

In 1992, Rawlings resigned from the military, founded the National Democratic Congress (NDC), and became the first President of the Fourth Republic. He was re-elected in 1996 for four more years.

After two terms in office, the limit according to the Ghanaian Constitution, Rawlings endorsed his vice-president John Atta Mills as presidential candidate in 2000.

Until his death he served as the African Union envoy to Somalia.

13 Nigerians who engaged Police in gun battle at Weija reman...
20 minutes ago