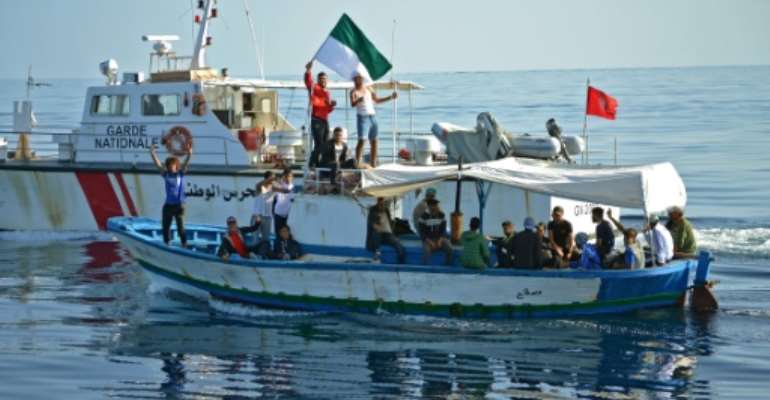 Tunisian football fans who set sail for Italy on Thursday in protest at sanctions against their club returned back home after a day at sea. By ALI ABBES (AFP)

Five fishing boats crammed with 300 Tunisian football fans who set sail for Italy to protest at sanctions against their club returned home Friday after a day at sea.

The supporters of the Croissant Sportif Chebbien (CSC) team, returned after leaving their home town of Chebba on Thursday after "assurances" from the authorities, one of the leaders of the football supporters said.

The flotilla of fans, brandishing Tunisian flags and those of their team, made it some 15 kilometres (nine miles) out to sea from the port of Chebba monitored closely by the coast guard, according to an AFP correspondent who followed them, but returned back hours after setting off.

Mohamed Ali Abbas, one of the leaders of the supporters and who was in the flotilla, said that they had been promised the matter would be resolved "in coming days", he told AFP.

"We have decided to return to the port, and believe in the goodwill of the authorities," Abbas said.

CSC chief Taoufik Mkacher has been in a months-long dispute with FTF chief Wadie Jary, publishing a series of Facebook posts criticising a lack of financial transparency and calling for an audit at the federation.

With their beloved football team suspended, the would-be migrants had said they wanted to cross the Mediterranean to Italy in a bid to seek a new life abroad.

Tunisia, struck by an economic crisis and skyrocketing unemployment even before the coronavirus pandemic, has seen a spike in young people making risky attempts at reaching Europe.