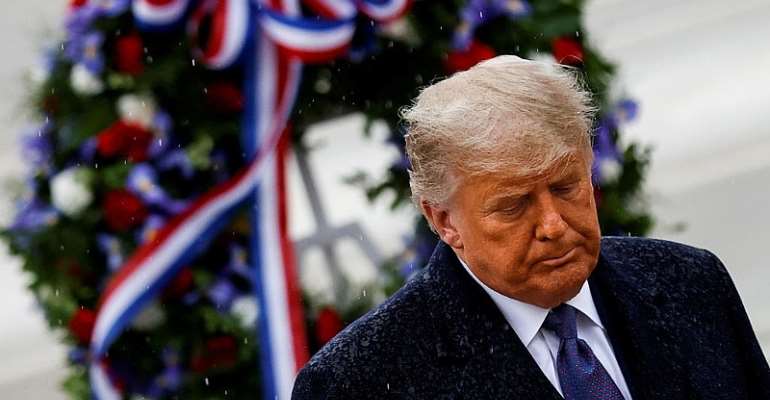 United States election officials said in a statement on Thursday that the 2020 presidential vote was the "most secure in American history", dismissing President Donald Trump's claims of fraud.

"There is no evidence that any voting system deleted or lost votes, changed votes, or was in any way compromised," said a joint statement released by the Election Infrastructure Government Co-ordinating Council.

"The November 3rd election was the most secure in American history,” it continued.

“Right now, across the country, election officials are reviewing and double checking the entire election process prior to finalizing the result," the Council said.

"While we know there are many unfounded claims and opportunities for misinformation about the process of our elections, we can assure you we have the utmost confidence in the security and integrity of our elections, and you should too," it added, without naming Mr Trump directly.

The statement is a clear rejection of President Trump's unsubstantiated claims of election fraud, delivered from a body comprising both federal and state officials.

The council is made up of senior officials from the Department of Homeland Security, the US Election Assistance Commission as well as officials at state-level who oversee elections and representatives of manufacturers of voting machines.

It was released hours after Trump, who has yet to concede to Biden, tweeted further claims of huge fraud on Thursday.

US television networks are now declaring Arizona, one of the last to be called, for Biden. The state has not voted for a Democrat since 1996.

Meanwhile, China, which has been slow to speak out, on Friday extended its congratulations to Biden and Vice-President-elect Kamala Harris. "We respect the choice of the American people," a foreign ministry spokesman said.

Republicans divided on Trump stance
Former US president Barack Obama on Thursday criticized senior Republicans who back Trump's claims of fraud, saying that they are undermining democracy.

"It's one more step in delegitimising not just the incoming Biden administration, but democracy generally, and that's a dangerous path," he told CBS News ahead of the release of his new memoir, A Promised Land.

Some Republicans have expressed unease at Trump's decision to ban federal agencies from co operating with President-elect Biden's team.

The move puts senior US government officials in a difficult position, helping an incoming president during the transition period is a long-standing American tradition

However, a small but growing number of Republicans are now backing calls for Biden to be given daily intelligence briefings.

Key Trump ally Sen. Lindsey Graham and 2 other Republican Senators have said publicly that the President-elect should start receiving the secret presidential memo, in line with the custom for incoming presidents.

Most Republicans in Congress have not yet acknowledged Biden's win, perhaps reluctant to alienate Trump's supporters.

Biden working on transition
Biden on Thursday spoke with key Democrat leaders about the need for a coronavirus stimulus package.

He also named Ron Klain as his White House Chief of Staff.

The president-elect apparently spoke as well to Pope Francis, who offered his "blessings and congratulations". Mr Biden will be only the second Roman Catholic president of the US, after John F Kennedy.